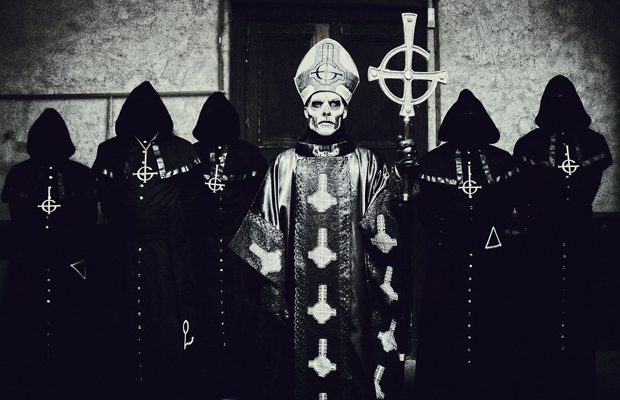 Professionally filmed video footage of Swedish occult rockers GHOST performing the song “Secular Haze” live on May 11 at Webster Hall in New York City can be seen below.

A nameless ghoul stated: “Playing in New York will always feel very special for us, since it was the first city in the U.S. that embraced us. Every time we play there, it marks another step up for us — going from filling up the basement at Webster Hall, to filling up the Bowery to finally play at sold-out Webster Hall. We simply love New York.”

In a recent interview with ARTISTdirect, a nameless ghoul from GHOST said about “Infestissumam”: “It feels way more theatrical and bombastic. In many ways, ‘Infestissumam’ is thematically a continuation of where [the debut album] ‘Opus Eponymous’ began. Whereas a lot of the thematic ideas we have in mind for upcoming albums might differ a little bit and will go in another direction. That’s not to say we won’t sing about the things we do and not have makeup. I’m just saying it will evolve into other things in the future. On this record, I feel like we’re doing a lot of things we intended to do on the first naïvely being we could pull off a show like that at that point — which we couldn’t. Now, we have a little bit more muscle. The attendance is probably more in accordance with being able to present a show like that.”

Regarding the lyrical themes covered “Infestissumam”, the nameless ghoul said: “Thematically we knew the major difference between the first and the second albums as much as we do between the second and the third. It’s a bit ironic now. Jumping up to the contemporary controversy with our album artwork and the refusal of printers to print the art is funny because the whole record is about the presence of the devil. Obviously, it’s about how mankind relate to the presence of the devil. Historically, it’s always been the female body that has taken the fall for that, which is what happened in this case. The problem was a vagina in the art not the inverted crosses.”