DESTRUCTION Joined By KRISIUN For Cover Of VENOM Classic (Video) 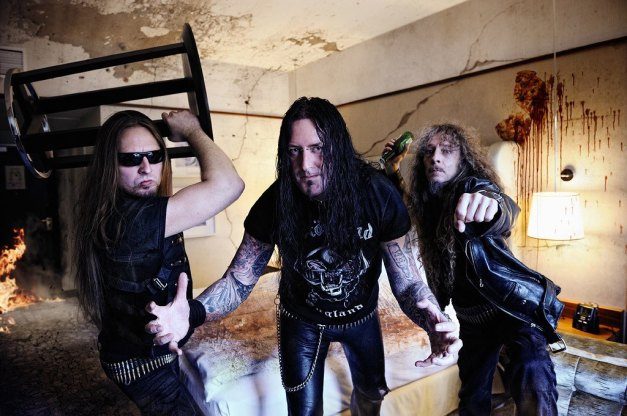 Brazilian death metallers KRISIUN joined German thrashers DESTRUCTION on stage on Sunday, September 22 at the Rock In Rio festival in Rio De Janeiro, Brazil to perform a cover version of the VENOM classic “Black Metal”. Video footage of the performance can be seen below.

Said DESTRUCTION vocalist/bassist Marcel “Schmier” Schirmer: “I would like to dedicate this performance to my old-time buddy Michael Trengert [Nuclear Blast, Metal Blade] that passed away in that night when we were on stage in Rio.

“Michael was one of the founders of the German metal scene, a great friend and maybe the most honest guy in this monkey business. He will be missed like no one else!

DESTRUCTION‘s 30th-anniversary album, “Spiritual Genocide”, was released on November 23, 2012 via Nuclear Blast Records. The follow-up to 2011’s “Day Of Reckoning” was recorded at Gernhart Studios in Troisdorf, Germany with engineer Martin Buchwalter and was mixed by Andy Classen. The album features guest appearances by Thomas “Angelripper” Such (SODOM), Andreas “Gerre” Geremia (TANKARD) and Ol Drake (EVILE). In addition, the “Mad Butcher”/“Release From Agony” lineup of DESTRUCTION — featuring guitarist Harry Wilkens and drummer Oliver Kaiser — reunited for one song.