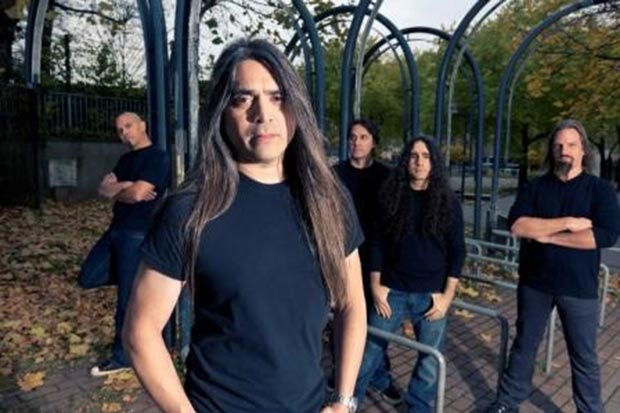 David E. Gehlke of DeadRhetoric.com recently conducted an interview with FATES WARNINGvocalist Ray Alder. A few excerpts from the chat follow below.

DeadRhetoric.com: The band has been active on the live front since the release of “X”, but did it ever cross your mind that as a recording entity, FATES WARNING may never record another album?

Ray Alder: Yeah, it definitely crossed my mind. People were doing their side-projects all over the place, and it was never discussed or anything that “We might not get around to doing another album, it’s been so long.” It was always in the back of my mind that we would, though.Jim [Matheos, guitar] and I are pretty proud in that way and don’t want to just fade away. I knew we’d get around to do another album, it was just a matter of when. All of these fucking side-projects, but here we are now and I’m completely happy.

DeadRhetoric.com: You had a stretch where REDEMPTION was your main thing, obviously.

Alder: I think I did four albums with REDEMPTION. Jim was doing OSI, and they seemed like his main thing. It was never meant to be that way, but I had the opportunity to tour and record with REDEMPTION and I don’t want to sit around and do nothing.

DeadRhetoric.com: There’s been a lot of patience from your fanbase. You haven’t totally fallen off the map. There’s genuine interest in another FATES WARNING record. Did that help with getting the album together?

Alder: I think it’s nice and great. We never completely went away, and even if we weren’t touring the States, we were touring in Europe. We’d always go over there and do a few shows and do three-week tours — maybe subconsciously so people wouldn’t forget about us over there. [laughs] Our European fans knew that we were always around; it was American fans that probably feel a little left out. It’s nothing personal – it’s a lot harder to tour in America than in Europe. Everything is so far away and expensive, while in Europe, shows are usually no more than four or five hours away.

DeadRhetoric.com: Going back, you joined the band in ’88, so that’s 25 years. The storyline of you replacing [John] Arch is well-known at least from his vantage point, but how about yours?

Alder: I remember being completely intimidated and scared. I was a young kid. They were my favorite band in the world and I had never even left Texas and the only reason I left was to go to Connecticut to audition with those guys. I remember getting off the plane and having dinner…it was the weirdest thing ever, scary. I got through it and did a good job, and [Metal Blade‘s] Brian Slagel came in and I remember thinking, “Oh God, Brian Slagel!” Now, we’re great friends. It was exciting and new, and I had no idea where it was going to go, but I didn’t care. It’s funny because music wasn’t my dream — I was just doing it in local bands, but once I started, it was amazing.

DeadRhetoric.com: Do you remember what songs you auditioned with?

Alder: “Quietus”, a part of the from “Beyond The Ivory Gates”. I remember I recorded that on a four-track.

DeadRhetoric.com: Your voice back then was so high…

Alder: [laughs] It was so ridiculous. I was trying to do the John Arch thing, and that was the ’80s — everybody was doing it, so I thought it should do it too. As I got older, and before my voice started to change, I just didn’t want to sing high anymore. Chris Cornell, he can sing high now and he doesn’t sound silly to me. It’s not operatic; it’s screaming… I love his voice. Then you have other singers (mimics falsetto)…

DeadRhetoric.com: See, you still got it in you.

Alder: I think my voice has changed because I didn’t want to be over the top; probably because of the cigarettes and booze. [laughs]