METALLICA’s JAMES HETFIELD: ‘We Want To Make A Record’ 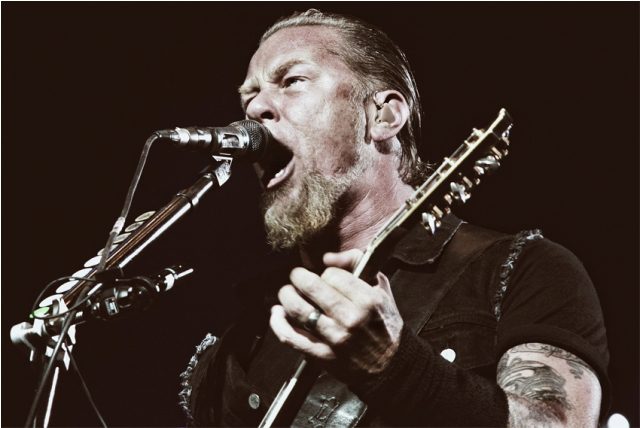 METALLICA frontman James Hetfield recently spoke to The Detroit News about the progress of the songwriting sessions for the follow-up to the band’s 2008 album “Death Magnetic”.

“We have been pushing that further and further away,” Hetfield said. “We want to make a record, that’s what we do best and that’s what we’ve gotta do in springtime. We’ve got skeleton bones that we’re starting to lay out to make something out of it, but there’s a lot of work ahead of us that we’re really excited about doing. And that will be next year.”

Hetfield was also asked if the group planned to stage a third installment of its Orion Music + More festival in Detroit next year, after bringing the show’s second edition there last June.

The guitarist/vocalist replied: “I sure hope so, that is the plan. The festival itself is not 100 percent greenlit yet. There’s gotta be a powwow where all of us get together and make sure we’re on the same page.”

METALLICA surprised fans at Orion Music + More on June 8 by playing its 1983 debut disc “Kill ‘Em All” from beginning to end on a smaller stage at the event. METALLICA was officially announced to play a headlining set on June 9 to close out the festival, but hit the stage at 4:30 p.m. one day earlier for a 10-song set that started with “Hit The Lights” and finished out with “Metal Militia”.

The afternoon slot was officially taken by an “act” called DEHAAN — which METALLICA fans may have recognized as the name of actor Dane DeHaan, who is starring in the band’s 3D movie, “Metallica Through The Never”. Another hint was dropped when Hetfield posted a message on Instagram which read, “Don’t miss Dehaan! #MUYA #mff #UwillRegretMissingThem #IfUdoUmightKillEmAll #winkWink #getIt?”

Hetfield came onstage first to introduce “DEHAAN,” after which the rest of the members of METALLICA came out and began playing.

At last year’s Orion festival, METALLICA played both 1991’s self-titled “black album” and 1984’s “Ride The Lightning” in their entirety on separate nights.