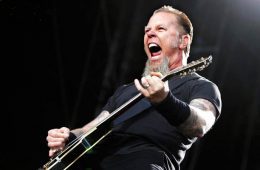 METALLICA’s JAMES HETFIELD: ‘Writing Music Is Somewhat Important To Us’

Manos SpanosOctober 24, 2013
The four members of METALLICA spoke to HuffPost Canada about the progress of the songwriting sessions for the long-awaited follow-up to the band's 2008 album, "Death Magnetic", tentatively due in 2015. "Writing music is somewhat important to us," METALLICA frontman James Hetfield said. "We focus. Focus." "That's the plan," added guitarist Kirk Hammett. "We'll start writing the album. We were supposed to start last year [laughs] but there you have it; we'll see how it goes." "We are looking forward to making a record," drummer Lars Ulrich said. "It's not even penciled anymore," said bassist Robert Trujillo. "We're going to have to do this." "Up at HQ in northern California, we've already done, what, two or three dances there," saidUlrich. "We've got a lot of the basic stuff waded through. When we write, we have a very peculiar writing process; we don't sit down and go, 'Okay, A to E to let's come up with something.' Ninety-five percent of our records come from jams — literally pre-concert jams, tuning room jams, all this kind of stuff — so everything we do is always recorded," he explains. "The biggest time consuming element of us making a record is listening to all the stuff that we've recorded. So there's five years worth of stuff. We've listened to about 80 percent of it. We've done two or three dances maybe, collectively six weeks to just listen through the ideas and kind of grade them." "Process of elimination, too, at the same time," Trujillo interjected. Continued Ulrich: "Grade them. Five stars, four stars, three stars, and then we take all the five stars bits and try to make songs out of them." "But during that time we're having a blast, really a lot of fun doing it," added Trujillo, "so if we can continue with that spirit, we're gonna have a good time making this record." Ulrich acknowledged in a new interview with U.K.'s Kerrang! magazine that the band's next studio album is unlikely to arrive before 2015 at the earliest. The drummer explained: "Obviously, there are a lot of people asking where the next record is. We're going to make another record, but like I said before, we don't really feel this kind of… what's the word? I guess 'responsibility' is probably the right word. We don't feel this inherent responsibility to just churn out records whenever people want them. [Adopts a sarcastic voice] 'I'm sorry! Let me slap myself on the wrists and go make a record for you!' We'll get 'round to it again." Asked about a possible release date for METALLICA's next CD, Ulrich replied: "Actually, we know the date… no, we don't! If I was betting on this, I would say 2015 — that's where my money is. So if you think of the actual age of this planet, if it's been 75 billion years since dinosaurs walked the Earth or whatever, then one year is basically a blink of an eye, right?" Ulrich also spoke about METALLICA's mindset going into the songwriting phase for the band's next album. He explained: "The only thing I can tell you is that there seems to be a consensus in the band that [2008's] 'Death Magnetic' was a really good record that we're proud of, that had good legs on it — meaning that it still sounds really rocking five years later. And I can tell you that with most of the previous METALLICA records, I found any faults, I had any issues with them way, way sooner than five years. So the stuff that we've been jamming on is certainly not a million miles removed from where we left off from 'Death Magnetic'. But two years from now, when I sit and talk to you about the new record, it'll probably be a different story from the six-year-old looking for the ice cream shop." According to Lars, there is no shortage of ideas for METALLICA's next CD, with the guys having met up twice in the last six months to cook up some tasty riffs in the studio. "We have more riffs than we know what to do with," Ulrich said. "We talked about setting up a special riff thing, where maybe we could share some of these riffs with others, like an eBaykind of thing for leftover riffs. Some of them are actually quite decent, but we won't be able to use all of them."
04 min read 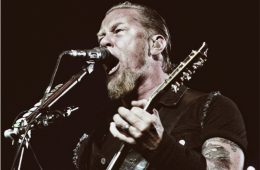 METALLICA’s JAMES HETFIELD: ‘We Want To Make A Record’

Manos SpanosOctober 6, 2013
METALLICA frontman James Hetfield recently spoke to The Detroit News about the progress of the songwriting sessions for the follow-up to the band's 2008 album "Death Magnetic". "We have been pushing that further and further away," Hetfield said. "We want to make a record, that's what we do best and that’s what we've gotta do in springtime. We've got skeleton bones that we're starting to lay out to make something out of it, but there's a lot of work ahead of us that we're really excited about doing. And that will be next year." Hetfield was also asked if the group planned to stage a third installment of its Orion Music + More festival in Detroit next year, after bringing the show's second edition there last June. The guitarist/vocalist replied: "I sure hope so, that is the plan. The festival itself is not 100 percent greenlit yet. There’s gotta be a powwow where all of us get together and make sure we’re on the same page." This year's Orion two-day event drew at least 20,000 people a day to see METALLICA, RED HOT CHILI PEPPERS, DEFTONES, SILVERSUN PICKUPS, RISE AGAINST and more. METALLICA surprised fans at Orion Music + More on June 8 by playing its 1983 debut disc "Kill 'Em All" from beginning to end on a smaller stage at the event. METALLICA was officially announced to play a headlining set on June 9 to close out the festival, but hit the stage at 4:30 p.m. one day earlier for a 10-song set that started with "Hit The Lights" and finished out with "Metal Militia".
02 min read 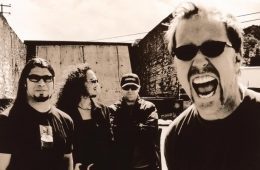 METALLICA: We Weren’t Allowed To Play ‘Master Of Puppets’ In China

Manos SpanosSeptember 25, 2013
The members of METALLICA have revealed that they were asked to send the lyrics to their entire discography to the Chinese government for approval before they were given permission to play in the country. "We had to give them a whole set of songs and they went through all the lyrics and okayed which ones we could play, which ones we couldn't play," METALLICA guitarist Kirk Hammett revealed during an appearance on "The Howard Stern Show" on Monday, September 23. "They see a lyric like 'Master Of Puppets' being so subversive that they're not allowing us to play it. It's kind of scary." Added METALLICA frontman James Hetfield: "And that just brings more attention to it, of course. That doesn't work." According to METALLICA, they never considered canceling their Chinese shows after being told which songs they couldn't perform in the country. "There were 40,000 kids over those two nights that were, I mean, they were really responding to what we were doing," said METALLICA drummer Lars Ulrich. "It was insane." "Whatever rules they set down, the fans were there to have fun," stated Hetfield. "We got our foot in the door. We were able to go and play in China. That was the key."
02 min read

METALLICA’s JAMES HETFIELD: It’s A ‘Blessing’ To Be Doing What We Love After 30 Years

Manos SpanosAugust 27, 2013
The four members of METALLICA took part in a press conference prior to the band's August 24 performance at Changi Exhibition Centre in Singapore. You can watch video footage of the question-and-answer session below. On how they deal with the physical demands of touring: Kirk Hammett (guitar): "I do a lot of yoga. We're all pretty physical. Rob [bassist Robert Trujillo] and I like ot surf. We just got off a week-long stint in Bali, surfing a lot. You know, it's important to keep maintenance on the road — eat well, sleep well, and just make sure the engine inside is running well. It's really important. 'Cause the last thing I wanna do is drop on stage." Robert Trujillo: "You go through transitions in life, and you have to adjust, and you have to listen to your body and you have to listen to your spirit and really focus on what that means. And you will continue to enjoy life and do things that you couldn't imagine. I mean, to be honest, at least for Kirk and I, we're surfing better than we ever have in our life right now, at our age, which is pretty cool. So if you take that to the stage as well, it's the same principle. You get up there, you play hard and you just know your body and don't push the limits too far so you don't hurt yourself." Lars Ulrich (drums): "We have two guys downstairs who take care of stretching us and putting us back into shape — our necks and our arms and everything. They're among the two hardest-working guys in rock and roll. So we take all that stuff really seriously. I mean, if you could see our [tour] rider, it's carrots and strange vegetables and nasty fruit juices. It's not what it was back in the day, thankfully. But yeah, we do take [staying healthy] very seriously. Absolutely." On how long they can keep METALLICA going: James Hetfield (guitar, vocals): "We'll do this until we don't wanna do it anymore; it's as simple as that. There's no use doing something your heart is not in. But for us, we love what we do and we're blessed that way." On what advice they would give to young, up-and-coming bands:
02 min read

JAMES HETFIELD On Next METALLICA Album: ‘I Want It Done Yesterday’

Manos SpanosMay 22, 2013
METALLICA guitarist/vocalist James Hetfield and bassist Robert Trujillo spoke to Billboard.com about the progress of the songwriting sessions for the band's long-awaited follow-up to 2008's "Death Magnetic", tentatively due in 2015. "I want it done yesterday," Hetfield said, "and [METALLICA's second Orion Music + More festival] and [the upcoming 3D] movie ['Through The Never'] is keeping us pretty busy at this point and it's taking a lot of our time and effort. We've been touring some obscure places; I guess basically what we're trying to do is pay for this movie, so the touring is keeping us from getting in there and finishing the record. Right now the focus is on the movie." He continued: "We got out into the room and jammed and we've come up with enough material for a record, for sure. We've gone through maybe one-tenth of the material that's on our riffs CDs. We've got enough for an album, we just haven't had enough time to really focus on it and dial in and start whittling it into these masterpieces, hopefully."
02 min read

METALLICA’s JAMES HETFIELD Is ‘Still Searching For The Ultimate Riff’

Manos SpanosMay 14, 2013
"MK Ondergrond" (meaning "Underground" in Afrikaans) conducted an interview with METALLICA frontman James Hetfield last month when the band returned to South Africa for three shows — one in Johannesburg and two in Cape Town. You can watch the chat below (Note: The intro is in Afrikaans, but the interview was conducted in English). "MK Ondergrond" (Facebook page) is South Africa's first dedicated underground music variety show, hosted by a macabre crew of animated characters, featuring band interviews, video reviews, gig guides and the best in local and international underground music videos. MK Ondergrond: So, here's an odd question to break the ice: without glam, or at least the hatred of glam, would thrash metal exist?
05 min read

METALLICA’s JAMES HETFIELD: ‘We Haven’t Even Started Writing’ Songs For Next Album