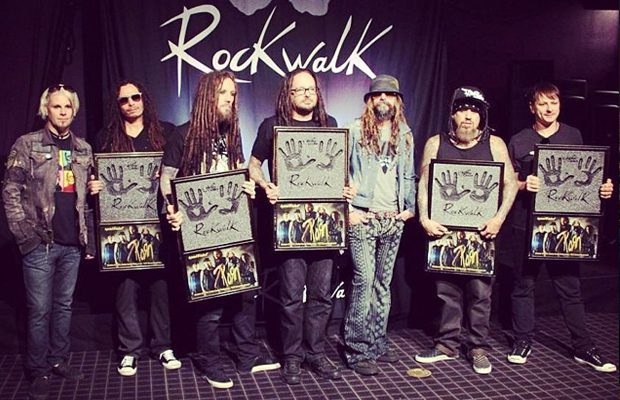 KORN was inducted into Guitar Center‘s RockWalk on Sunset Boulevard in Hollywood, California on Tuesday, October 8, the same day that the band released its 11th album, “The Paradigm Shift”.

A video report on yesterday’s ceremony — courtesy of Press Association — can be seen below.

KORN frontman Jonathan Davis said, “When you look at the names of the other people inducted here all you can say is ‘Wow!’ What an honor!” KORN guitarist James “Munky” Shaffer added, “When we started out, we were five guys in a garage with a dream. I’d like to think we tried our best to create some great music and an innovative sound but to be honest we are truly humbled to be included here.”

RockWalk chairman Dave Weiderman said, “KORN is about as innovative and influential as they come. They have been purveyors of metal’s progression since their formation, and are even credited with creating the nu metal subgenre. For these reasons, and many more, KORN is exactly the type of band the RockWalk is here to honor.”

The Pulse Of Radio asked Welch what the most important thing would be that he would advise young musicians about being in a rock band. “You’ve got to get it in your head and your heart right now that you being this musician, it’s not for you. It’s for the fans,” he said. “If you want to go out there and play onstage for a living, you are giving your life for your fans. And it’s not about them worshiping you, it’s about you giving a gift to them that they can appreciate. And once you make it about you, you’re gonna start to shake and you’re gonna break down and fall.”

KORN and ROB ZOMBIE will co-headline the “Night Of The Living Dreads” tour this fall. The 17-date run begins on November 3 in Reno, Nevada and wraps on November 26 in Bethlehem, Pennsylvania.