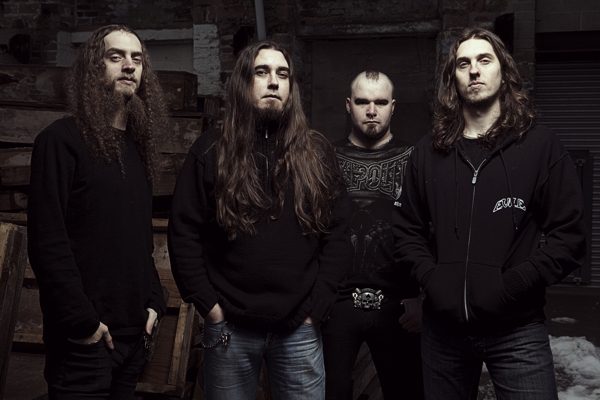 British thrashers EVILE are now accepting applications for their vacant lead guitarist position. If interested, please send any links, videos, photos and biogs as well as a brief statement about yourself to: evileguitarist@gmail.com.

On August 30, guitarist Ol Drake announced his departure from EVILE. he explained in a statement: “Over the past year, I’ve, unfortunately, found myself becoming more and more detached from the touring/band lifestyle.

“In my opinion, the music business for a band of our genre and ‘level’ determines a very unrealistic way of life to me, and I personally find it difficult to make a living and have a ‘normal’ life.

“I’ve reached a point where I want a family/kids, a house, a steady and definite income and everything in between, and in regard to my personal preferences, a touring band’s income and uncertainties, in the state that I feel they would continue to be in, has become incompatible with how I feel and what I want/need.”

EVILE released its fourth album, “Skull”, on May 27 in Europe on Earache Records and in North America via Century Media/Earache Records. The follow-up to 2011’s “Five Serpent’s Teeth” was once again recorded with producer Russ Russell (NAPALM DEATH, DIMMU BORGIR) at Parlour Studios in Kettering, England. The artwork for the album was painted by artist Eliran Kantor (TESTAMENT, SODOM, HATEBREED).