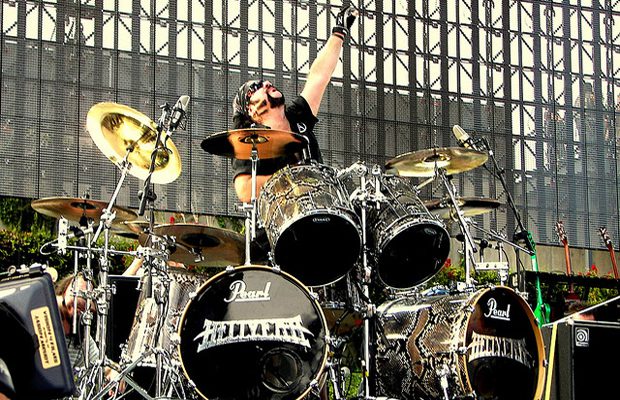 Former PANTERA drummer Vinnie Paul Abbott has once again shot down the possibility of a PANTERA reunion with Zakk Wylde (BLACK LABEL SOCIETY, OZZY OSBOURNE) filling in for the late “Dimebag” Darrell Abbott on guitar. Speaking to Revolver magazine’s Jon Wiederhorn for a forthcoming story on Paul‘s current band, HELLYEAH, the drummer had the following to say: “If you had an ex-wife, and it was a pretty bitter split, you might not ever want to talk to her again. Who cares if everybody in the family and your friends want you to say hello again? It’s your choice whether you want to do it or not. And I think a lot of people are selfish. They say, ‘Oh, he oughtta just kiss and make up with Phil [Anselmo, ex-PANTERA singer] and everything will be cool. And then they can go get Zakk Wylde and everything’s gonna be great.’ No, everything’s not gonna be great.”

During an interview with Matt Pinfield of Fanpass at this month’s Rock On The Range festival in Columbus, Ohio, Anselmo stated about the possibility of a PANTERA reunion: “I think the situation would have to be correct.” After Pinfield interjected that Zakk would be the perfect guy to step in for Dimebag, Anselmo added: “Yeah, yeah, yeah. No doubt. We [DOWN] are on tour with fucking BLACK LABEL SOCIETY right now, and don’t ever underestimate the power of conversation between Zakk and I. And I know [former PANTERA bassist] Rex [Brown] is a smart man. But at the end of the day, there would have to be a meeting at a table — or without a table — between Rex, Vince and I, and there would have to be a bigtime understanding between the two of us [Vinnie and Philip] before anything happens at all. Otherwise I think… There is a great percentage of me that says, ‘This generation deserves it. Let’s do it.’ And then there’s a reservation in me that says, ‘You know what, man? Legacies get passed down. This, that, the other. Maybe we should leave it alone and just let it be part of lore and the history and whatnot.'”

Later in the interview, Anselmo once again spoke about a hypothetical PANTERA reunion, telling Pinfield, “If there was ever a proper presentation, like, OK, PANTERA is back together, Zakk‘s on guitar, that would be a massive feeling. That would be outrageous. And I would go to war. I would be in the best shape possible.”

Speaking to Artisan News in September 2013, Wylde was asked about the possibility of a hypothetical PANTERA reunion with him filling in for Dimebag on guitar. “It’d be up to Vinnie, Phil and Rex — they’re the guys that make everything happen,” he said. “So if they were all gonna do it and honor Dimebag and [if they said to me], ‘Zakk, would you wanna honor Dime and do Dime‘s parts?’ Of course, I was a pallbearer for him — I laid him to rest — so, of course, I’d say, it would be a beautiful way to honor him and stuff like that. And to celebrate all things PANTERA and what they achieved. ‘Cause they changed the game, as far as extreme metal goes. I mean, they’re the kings of it. But it’s up to the fellows. Then it would just be me woodsheddin’ 25-8, learning all of Dime‘s parts, you know what I mean?! Yeah, but like I said, as far as I’m concerned, it would just be honoring Dime. Like with the Yankees, you honor… everybody’s wearing Thurman Munson‘s ’15’ for that day, just because we’re honoring Thurman‘s greatness. So it’s the same thing, man.”

Dimebag‘s longtime girlfriend Rita Haney in 2011 called on Vinnie and Anselmo to settle their differences in honor of Dimebag, who was shot and killed by a crazed gunman while performing with DAMAGEPLAN at a Columbus, Ohio rock club in December 2004.

Vinnie, who is Dimebag‘s brother, and Anselmo have not spoken since PANTERA split in 2003. But the relationship got even more acrimonious when Vinnie indirectly blamed Philip for Dimebag‘s death, suggesting that some remarks the vocalist had made about Dimebag in print just weeks earlier might have incited Dimebag‘s killer.

Anselmo and Brown joined BLACK LABEL SOCIETY on stage on May 23 at Verizon Theatre in Grand Prairie, Texas to perform a cover of the PANTERA classic “I’m Broken”. Fan-filmed video footage of their appearance can be seen below.