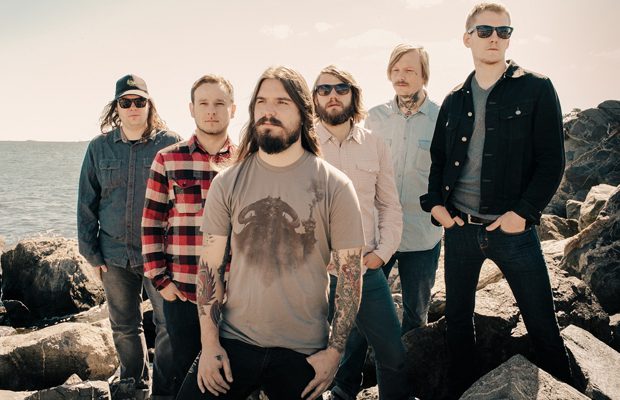 Professionally filmed video footage of Norwegian rockers KVELERTAK performing the song“Bruane Brenn” live at Electric Ballroom in London, England in March 2013 can be seen below. The track comes off the band’s sophomore album, “Meir”, which topped the official chart in Norway. The CD, which sold 1,800 copies in the United States in its first week of release, was issued on March 26 via Roadrunner Records. It was produced by CONVERGE‘s Kurt Ballouand features cover artwork by John Dyer Baizley.

Asked how the band came up with the concept for the “Bruane Brenn” music video, vocalistErlend Hjelvik told About.com Heavy Metal: “It was Vidar [Landa, guitar] and Marvin‘s [Nygaard, bass] idea. I guess we didn’t have time to be in the video ourselves, so they came up with an idea of having a bunch of kids in the video. A friend of ours, who’s a Norwegian movie director, Stian Kristiansen, then kind of developed the idea and made a small story out of it. It turned into a fun and great looking video that fits really well with the lyrics.”

Regarding the recording process for “Meir”, Erlend said: “I thought it was even more fun than last time. Mostly because we’ve all gotten more confident and experienced from all the touring we’ve done on our first album. Also Kurt is an awesome guy to work with; he’s professional and has a great ear for what things should sound like.”