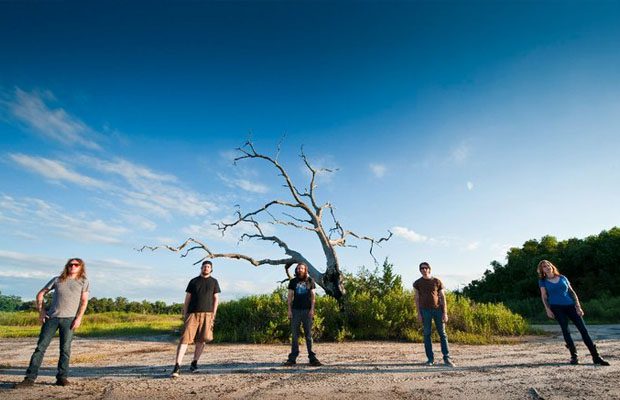 “Low Tide”, the new video from the genre-defying Savannah quintet KYLESA, can be seen below. The animated clip was directed by Brodie Rush.

KYLESA will make its eagerly awaited return to Europe in support of the band’s current album, “Ultraviolet”. The extensive tour will kick off on January 10 in Prague, Czech Republic and continue until February 8 in Leipzig, Germany. Suopport on the trek will come from SIERRA and JAGGED VISION.

“Ultraviolet” was released on May 24 in Europe and May 28 in North America via Season Of Mist. The follow-up to “Spiral Shadow” was recorded at The Jam Room in Columbia, South Carolina, with the band’s guitar player/songwriter and sought-after producer, Phillip Cope (BARONESS, BLACK TUSK), once again overseeing production.

The cover artwork for “Ultraviolet” was created by Sean Beaudry. Beaudry, a fellow Savannah resident, did the artwork for the band’s “Time Will Fuse Its Worth” reissue.

“All of our studio albums have their own unique identity and we’ve always been a band who strives for something different than what current fads suggest. With ‘Ultraviolet’, we took a step inward and wrote music that we felt we had to write; this album centers around the multiple themes of loss and you can feel it in the music. Everyone goes through it during their lifetime and this record reflects that experience.”

KYLESA issued a rarities collection in November 2012 titled “From The Vaults, Vol. 1”, which featured previously unreleased, new and alternate versions of songs spanning the band’s catalog as well as one new song titled “End Truth”. Cope and Pleasants spent over a year going through their archives preparing the release.