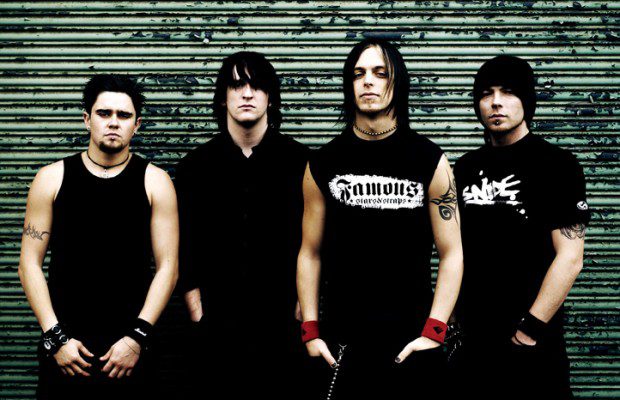 A brand new song from Welsh metallers BULLET FOR MY VALENTINE entitled “Raising Hell” will be premiered on the November 18 edition of BBC Radio 1‘s “Rock Show” with Daniel P. Carter.

“Words cannot express how excited I am for the world to hear #RaisingHell,” says BULLET FOR MY VALENTINE frontman Matt Tuck via Twitter. “We haven’t just raised the bar, we’ve sent it into fucking orbit.”

An audio sample of “Raising Hell” can be streamed below.

BULLET FOR MY VALENTINE drummer Michael “Moose” Thomas told Billboard.com in a recent interview that the band has “already started writing for the next album, which is completely different from [this year’s] ‘Temper Temper’.”

“It’s definitely more of a step towards our first two records,” Thomas said. “We always like to keep changing our records and our sounds and stuff. I think you have to change, otherwise it gets boring for us and the fans get bored. Look at all the great bands through rock history; they changed on all their albums — especially METALLICA. Their albums have always changed, and they’re the biggest metal band ever. So we just want to keep changing and get to another level each time out.”

Tuck told the U.K.’s Rock Sound magazine, “We’re actually going to start working on the new record before the (U.K.) arena dates (in early December). We’ve got (producer) Terry Date coming over from America, we’d like to work with him, he’d like to work with us so we’re gonna have a bonding session, write a couple of songs and see how it goes.”

Date is known for working with heavier acts like PANTERA, WHITE ZOMBIE and DEFTONES, while BULLET‘s previous producer, Don Gilmore, is known for more commercial fare like LINKIN PARK.

Tuck said about hiring Date, “When we worked with Don, he was very much focused on chopping parts out and making things concentrated, now we want to work with someone who has worked with bands like PANTERA and DEFTONES, where that mentality was probably not in the game at all. We want someone to go ‘it’s not big enough’ or ‘it’s not metal enough’ and keep us focused on our talents.”

Tuck told The Pulse Of Radio a while back that he had no regrets about the band exploring its more melodic side on its last two albums. “The big thing that we’ve learned is, like, you’re not gonna please everyone all the time,” he said. “As long as you do what you want to do and the band is happy and you feel you haven’t given away your integrity, you know, I don’t really care if people go, ‘Oh, it’s not metal enough, it’s not heavy enough.’ It’s like, that’s not what we are.”

The singer said that the band already has “four or five song ideas” ready to go, adding, “It’s riff after riff after riff after riff so far. We’re very much concentrating on musical ability, we’re showing off basically! We pulled back a bit from it on the last couple of records, on this one if we do work with Terry Date, I think it’ll be a no-holds barred display of what we’re about.”

“Temper Temper” entered The Billboard 200 album chart at No. 13 earlier this year. The latest single from the disc is “Dirty Little Secret”.