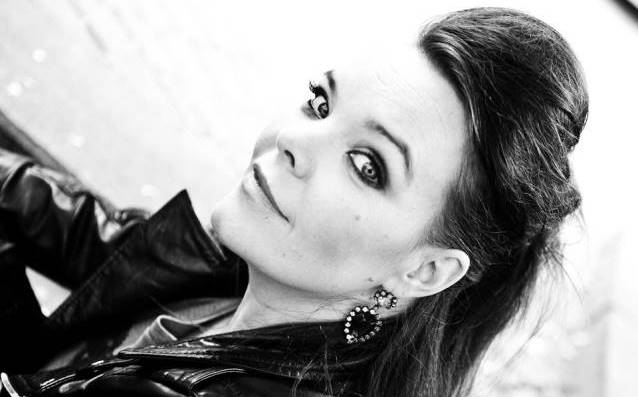 Former NIGHTWISH singer Anette Olzon will release her debut solo album, “Shine”, on February 28, 2014 via earMUSIC, the Hamburg, Germany-based international rock label which is part of Edel Group. The CD, which was co-produced by Anette Olzon and Johan Kronlund, is a collaboration with some of the most successful teams in rock and pop in Scandinavia: Stefan Örn (songwriter and producer of the 2011 Eurovision Song Contest-winning track “Running Scared”) and Johan Glössner. The album was mixed by Kronlund, Nicklas Flykt and Ronny Lahti (known for his work with Loreen and Roxette).

“I am so thrilled to finally release my first solo album,” says Olzon. “I’ve been working on it for a long time by now…

“The album is very personal with songs I have started writing already in 2009 but also very recent songs.

“The overall message of the album is that life can be really dark and filled with hardship and sadness, but you can always choose to see some light coming through, to make you stronger and full of life — making you SHINE… no matter what.”

Regarding the CD’s musical direction, Anette said: “In the end, it is a rock album. Well, a pop rock album, maybe, or would you call it pop metal?”

Olzon in 2011 released two demo tracks that she recorded in 2009 for what was supposed to become her debut solo album. She said at the time, “The songs are not mixed or produced, just recorded in the moment, and therefore are very rough songs. But I still want you to hear them since I am proud of them and I think they show another part of me than you hear in NIGHTWISH.” She added, “The first song is called ‘Floating’ and I call it the ‘circus’ song. It gives me a happy feeling and the vibe in it is happy and joyful. The second song [‘Invincible’] is a song I wrote for my son and therefore it’s very special to me.”

Olzon announced in April 2011 that she decided to push back the tentative release date of her debut solo album to after NIGHTWISH had completed touring in support of its then-yet-to-be-released new studio album, “Imaginarium”.

Olzon worked on material for her solo CD in 2009 with Swedish producers Stefan Örn and Johan Glössner. The album was slated to be co-produced by Swedish producer/songwriter Anders Bagge, who has previously worked with MADONNA, CELINE DION, JANET JACKSON and JESSICA SIMPSON, among others. He was also one of judges on the Swedish TV talent competition “Idol” and a producer of the TV series “Made in Sweden”.

Olzon in 2009 hired a personal manager — the Swedish management company Hagenburg Management, which also represents EUROPE and THE CARDIGANS.

Olzon abruptly left NIGHTWISH in September 2012 in the middle of the band’s North American tour. She has since been replaced by former AFTER FOREVER and current REVAMP singer Floor Jansen.