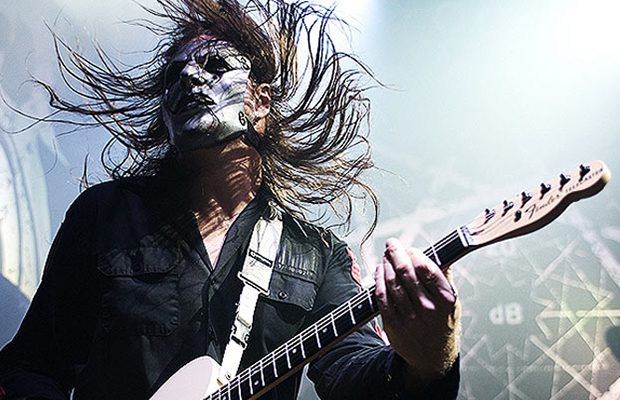 STONE SOUR guitarist Jim Root will sit out the band’s upcoming tour with POP EVIL and STOLEN BABIES in order to focus on the songwriting process for SLIPKNOT‘s long-awaited new studio album. STONE SOUR says in a statement: “Everyone involved is okay with the decision and our mutual friend Christian Martucci will be filling in on guitar.

“It was a difficult decision, but as the fans have wanted another STONE SOUR tour and Jim had responsibilities to the writing process with SLIPKNOT, we feel this is the best decision where everyone wins.”

STONE SOUR‘s tour with POP EVIL and STOLEN BABIES is scheduled to kick off on January 14 at the House Of Blues in Orlando, Florida.

SLIPKNOT singer Corey Taylor — who also fronts STONE SOUR — told ARTISTdirect in a recent interview that things may finally be moving forward for SLIPKNOT in terms of making its first new album since 2008’s “All Hope Is Gone”. Taylor explained: “SLIPKNOT is looming on the horizon. That’s what’s next in my mind anyway. I’m writing some demos. [Shawn ‘Clown’ Crahan, percussion] is putting some things together. Joey [Jordison, drums] is doing [his side project] SCAR THE MARTYR, but he’s a fucking machine. He can write at any time. This band is just loaded with writers. We don’t have a definitive start date, which is fine. That’s okay for us now. When we’re ready to make the album, we will. That’s the mindset. Next year we’re going to get together and start putting the pieces together.”

Asked what he thinks when someone brings up SLIPKNOT‘s 2004 album “Vol. 3: The Subliminal Verses”, Taylor replied: “That album is a bit of a peek at what I think the next album will be. It’ll be a cross between ‘Iowa’ and ‘Vol. 3’ in a lot of ways, while also evolving the way we always have. The stuff I’m writing right now is really dark. The stuff Clown is coming with is fucking beyond. It’s really cool. It’s going to be cool to get the alchemists in the same room and see what happens.”

Jordison recently told Stereoboard.com about the forthcoming SLIPKNOT CD: “What I can say is that there is SLIPKNOT material. We’re writing right now, and we’re all in talks . . . I’ve got so much SLIPKNOT material, I started writing this a long time ago. Y’know, when the time is right. Everyone works at their own pace and I can’t speak for anyone else, but for me, I just kinda put myself in the mindset where I’m writing for a certain project. I kinda just take myself to that place, get in that mindset. When the time is right.”

Jordison and Crahan are the main creative forces within SLIPKNOT and the ones most ready to make a new record, as Crahan hinted to The Pulse Of Radio not long ago. “Before you know it, there is going to be another record, and it’s gonna come sooner than anybody thinks,” he said. “Everybody thinks differently, but I’m here to tell you as the Clown, it’s gonna come sooner than you think and it’s gonna hit you in the back of the head instead of the front of the face. And it’s gonna be an amazing, amazing part of our lives.”

The new SLIPKNOT album will be the band’s first without bassist Paul Gray, another key member of the songwriting team who died of a drug overdose in May 2010.

Taylor and Root have spent the last three years recording and touring behind three full STONE SOUR studio records, 2010’s “Audio Secrecy” and the double concept album “House Of Gold & Bones”, which was released in two parts in 2012 and 2013.