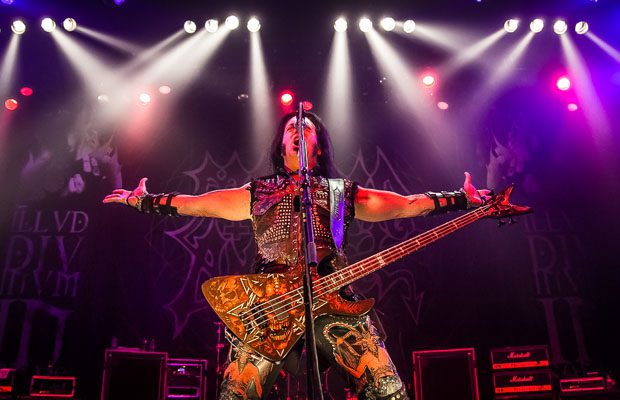 During a brand new interview with Invisible Oranges, MORBID ANGEL bassist/vocalist David Vincent was asked whether it was weird to perform the band’s 1993 album, “Covenant”, in its entirety on the group’s current North American tour without MORBID ANGEL‘s longtime drummer Pete Sandoval.

“Nope. Not at all,” Vincent replied. “Tim‘s [Yeung, MORBID ANGEL’s current drummer] an excellent drummer. He handles the material very well. He was a big fan of the record when it came out, too. He’s a couple years my junior, but it’s cool. He feels the songs really well, and it’s fun.

Regarding whether Sandoval is still a member of MORBID ANGEL, Vincent said: “Pete‘s no longer in MORBID ANGEL.” He added: “His whole way of life has changed. He’s in a different spot, and the spot that he’s in right now, Pete Sandoval and MORBID ANGEL are not compatible.”

Pressed to elaborate on this supposed “incompatibility” between Sandoval and MORBID ANGEL, Vincent offered: “Well, [Pete] has found Jesus. You can see where the incompatibility comes from.”

During a chat with Brazil’s Som Extremo in October 2011, Sandoval — who in 2010 underwent surgery after a prolapsed disc — was asked for his opinion about MORBID ANGEL‘s “controversial” new CD, “Illud Divinum Insanus”, which incorporates industrial and electronic elements into the band’s traditional death metal sound. “No comment! I don’t play on that album,” he said. He was then questioned about what he thought he would have done different on “Illud Divinum Insanus” had he played on the record. “More exreme deathgrind metal and less DJ, boring awful typical I care less industrial experimental same as everybody boring bull!” he said. “This is not what MORBID has been all about! …Hmmmmmm, and I really care less…!”

Sandoval recently celebrated the 24th anniversary of TERRORIZER‘s classic album “World Downfall” by performing the LP in its entirety at several shows. He was joined at the gigs by Lee Harrison (MONSTROSITY) and Sam Molina.