JOHN PETRUCCI: Drummer MIKE MANGINI Is ‘The Right Fit On Every Level’ 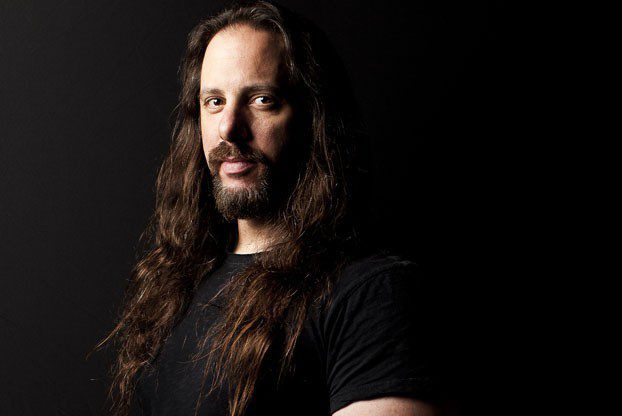 Robert Cavuoto of Myglobalmind webzine recently conducted an interview with guitarist John Petrucci of progressive metal giants DREAM THEATER. A couple of excerpts from the chat follow below.

Myglobalmind: Are there any pre-show rituals that you or the band does?

John: We do get together before going on stage and we talk to get our heads in the same place and bond. You’re about to walk on stage and play together for the next few hours, so you want to feel connected and make sure that everyone is in the same headspace; a good headspace. If someone is feeling out of sorts or detached, it’s a great time to bring them in and restate why we are here and what we are trying to do. Many times we talk about the people that have come to enjoy the show. They went through a lot to get here, whatever they needed to work out in their lives; they got babysitters, they traveled, and purchased the tickets. So it’s up to us to deliver the goods. We’re always in that headspace about the audience and less about us at that moment.

Myglobalmind: I thought one of the greatest compliments that anyone can give to a bandmate was what you said about Mike Mangini on the DVD during the drummer auditions that “he’s not just playing DREAM THEATER, he’s living it.”

John: We auditioned a lot of great drummers; every one of them was world-class. We had a lot of fun playing with each of them and had some great jams. With Mike, it was just something really special about what was going on. First and foremost, with everybody, we wanted to see if they can pull off the songs, play them correctly, and that they it felt right musically. That’s something Mike did; it felt like the band. He really gets the style and delivers in a powerful metal way. He has all the techniques, chops and sensibility; everything just flows musically. Over and above that, there were a few things, like his attitude and dedication to wanting to get everything exactly right, as well as genuinely wanting the position. Not just wishy-washy, “Yeah, if I get it, great. If not, OK too.” Personality wise, we are all kindred spirits. I’ve said this before; if we ever went to high school together, we would have been friends. He is just one of us. We felt that immediate connect. He the right fit on every level.

Myglobalmind: He also seems like a funny and entertaining guy too.

John: He’s hysterical; he keeps us entertained. If you bring somebody into the band, you are going to be with them a lot, whether it’s in the studio, on the tour bus, or at dinner every night. You want somebody you enjoy being around. You don’t want an annoying guy. [laughs]

Myglobalmind: You’re an amazing, accomplished guitarist. At what point in your career did you realize that your style was truly unique?

John: It’s hard to answer that from my own perspective, because when I’m playing, I know where it is coming from and the sources. Guitar players get inward and analytical about their playing, but when you start to get positive feedback from other players, it makes you think that it is coming together. For me, the first time I started hearing comments like that was after “Images And Words” was released. It seemed like there was a jump from the there for me stylistically. It wasn’t something I picked up on, it was comments that I received from other people and players.

Myglobalmind: When you were young and starting out, was there ever a band that you auditioned for who didn’t hire you for whatever reason?

John: I didn’t try out for bands when I was younger. I got into guitars intensely a couple of years into playing so much, by the time I was graduating high school, I was accepted into Berklee College Of Music. Practicing six hours a day, I was consumed with it. I somehow always found the right people on my own to jam with as well as playing with all my buddies. I didn’t get to a point where I was auditioning for any bands. Out of Berklee, DREAM THEATER was born and we’ve been together ever since. I didn’t have to taste that feeling of defeat. [laughs]