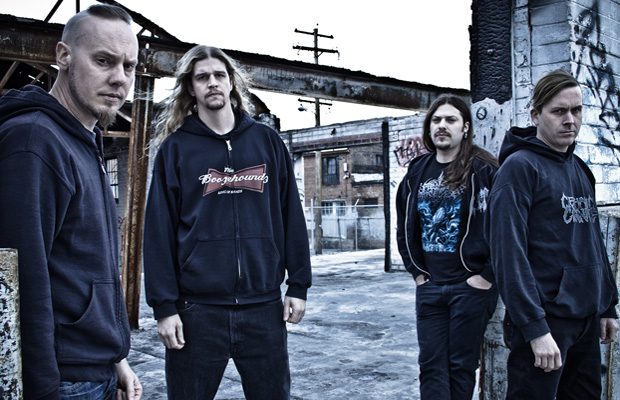 San Diego-based deathgrind masters CATTLE DECAPITATION have begun the writing process for the follow-up to 2012’s “Monolith Of Inhumanity”, tentatively due in early 2015 via Metal Blade Records.

Says vocalist Travis Ryan: “Since we got home from the Summer Slaughter Tour, the guys have been hard at work on new material! I actually go in next week to grab a quick runthrough of the first new track they have completed so I can start writing lyrics to it.

“I have heard the track and I hate to say anything just yet because we will be spending the next full year from now working on the next album, but I will say the stuff they’re working on is intense. I can’t wait to start writing lyrics to it and so far is in league with one of our current musical aspirations… to make fans of our last record shit themselves!

“We’ll be taking a small break to play a few shows in our region with EYEHATEGOD and our friends STRONG INTENTION on their January tour!”

“Monolith Of Inhumanity” sold around 2,400 copies in the United States in its first week of release. The CD landed at position No. 6 on the Top New Artist Albums (Heatseekers) chart, which lists the best-selling albums by new and developing artists, defined as those who have never appeared in the Top 100 of The Billboard 200.

Released on May 8, 2012, “Monolith Of Inhumanity” was produced by Dave Otero of Denver’s Flatline Audio and sees the band exploring innovative new techniques in songwriting without abandoning their signature formula of confrontational audio wreckage and self-loathing lyrical content.