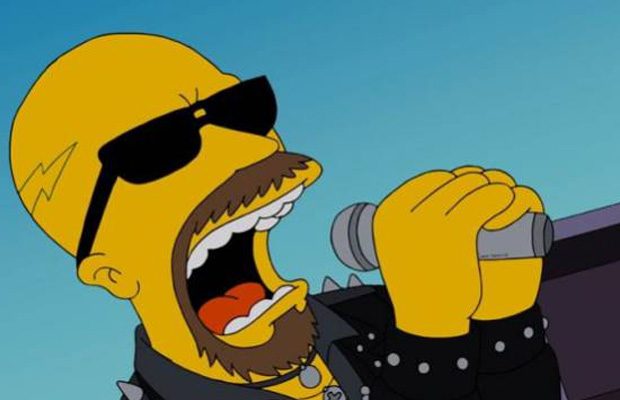 “Simpsons” executive producer Matt Selman told Entertainment Weekly that in the episode, titled “Steal This Episode”, Homer is taught by Bart how to illegally download films, and he starts screening them in his backyard for folks in Springfield. “Even though Homer is stealing, he’s doing it for the community, he’s doing it out of the goodness of his heart,” says Selman. An overzealous FBI director in charge of anti-piracy subsuqently goes after Homer, and JUDAS PRIEST singer Rob Halford winds up singing a parody of the band’s classic “Breaking The Law” in an effort to nab Homer.

Check out video footage of JUDAS PRIEST‘s appearance below.

Guitarist Kenneth “K.K.” Downing, who announced his retirement from JUDAS PRIEST in April 2011, told the Shopshire Star last week that ever since “The Simpsons” came out, it had been linked with rock and heavy metal music.

He said: “A few previous programs have used ‘Breaking The Law’ and other JUDAS PRIEST songs.

“Would I have said yes if I’d still been in the band?

“Probably, because it’s good exposure, although it would depend in what context.”

In 2002, Halford had a small film role as a pornographic video store clerk in “Spun”, a crime comedy-drama dark-comedy directed by Jonas Åkerlund, who has helmed music videos for some of the biggest pop and rock artists in the world. Rob told Screamer Magazine earlier this year: “I had a fantastic opportunity to work on that ‘Spun’ movie with Mickey Rourke. And to watch Mickey Rourke, I just don’t know how he does it. He just switches it on, and he’s a different person almost. That’s the great challenge that these actors have. It’s not easy, but these actors make it look easy because they are so good at what they do.”

Given a chance to act again, Halford said that he would certainly consider it. “I never say no to anything,” he said. “I think if you do, you don’t know what you’ve missed. I think you should try everything in life. If it doesn’t work out, then at least you can say you’ve tried it. There’s nothing worse than having regrets. If life affords you an opportunity and you can go for it, then you should.”