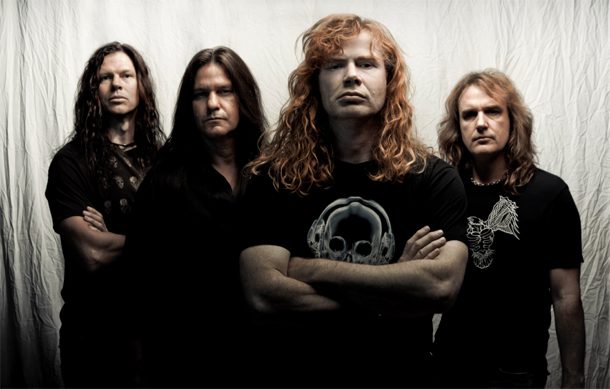 During a brand new interview on “The MetalSucks Podcast”, MEGADETH mainman Dave Mustaine was asked by SLAYER bassist/vocalist Tom Araya‘s recent claim that “the politics of character in one particular band” were preventing more shows featuring the so-called “Big Four” of 1980s thrash metal — METALLICA, SLAYER, MEGADETH and ANTHRAX — from happening in the future.

“I didn’t say that [no more ‘Big Four’ shows were ever going to happen again]. I said that I’m not the one to ask,” Mustaine said.

“I love Tom,” he contonued. “I think that all the hardship that we’ve had has been really sad, because, again, the media and stuff like that sometimes…

“People back in the day would try and propagandize everything I would say or put this inflammatory twist on whatever.

“There was things I did and said that caused some problems between Tom and I, and we worked it out.

“So, man, I have no problem with him or ANTHRAX or METALLICA, so I don’t know where that came from. It could be some really old stuff that got regurgitated again. But, you know, I buried the hatchet a long time ago with those guys.”

Speaking to Gazette.net, Araya spoke about the possibility of more “Big Four” shows in the future, saying: “I don’t want to say politics is preventing that,” Araya said. “It’s not the politics between bands; it’s the politics of character in one particular band.”

He continued: “We had an issue that came up on the New York show, which really freaked everybody out, but the New York show happened. I think, in all honesty, that was the last time we did the ‘Big Four.’

“I think another ‘Big Four’ show might not happen. They could prove me wrong.

“Those shows, basically, even though it was called the ‘Big Four,’ it was done through METALLICA. It was with METALLICA‘s blessing that allowed those shows to happen.

“If they want to continue and do a couple more shows, I think that would be great… If we were to sit down with them and communicate with them, that’s what I’d tell them.”

The “Big Four” played its last concert on September 14, 2011 at Yankee Stadium in New York City.

Two days prior to the “Big Four” event in New York, rumors spread that MEGADETH had pulled out of the concert so that Dave Mustaine could undergo surgery for stenosis, a neck and spine condition that he said was caused by “years of headbanging.” Mustaine eventually had a change of heart and decided to go through with the performance, but struggled through the set due to the pain. He later told NY Hard Rock Music Examiner: “It was very close, the day after that. I was supposed to not do that show. I’d been laying in the emergency room getting ready to have them put me to sleep, and I’d said we had to cancel the concert. And one of the people associated with the concert said I was a pussy, and I thought, ‘I’m a pussy. I’m getting ready to have two major spinal surgeries done and I’m a pussy. Okay.’ Obviously, you don’t know what pussy is, because that’s not pussy.”

In his autobiography, “Mustaine: A Heavy Metal Memoir”, Mustaine addressed the issue of where his band fit in the “Big Four” order. According to The New York Times, he assured the reader that he was not offended by being put behind SLAYER. But he added an interior monologue: “O.K., we’ll play ahead of you guys on this trip, and God willing we’ll do it again sometime in the near future and we can flip things around.”

The idea for the “Big Four” tour first came up in 2009 and METALLICA drummer Lars Ulrich told The Pulse Of Radio he was glad to finally see it happen. “It’s pretty amazing, if you think about it, that it’s the first time basically in 25 years or 30 or whatever that the four of us have actually played shows together,” he said. “So it was a lot of fun, a lot of memories, a lot of fun times — new fun times, and fun times talking about the old fun times. So it sort of was a, it was a winner on every front.”

In the spring of 2011, METALLICA, SLAYER, MEGADETH and ANTHRAX were presented with double-platinum plaques for the two-disc DVD release of “The Big Four: Live From Sofia, Bulgaria”, containing footage of the June 22, 2010 Sonisphere cinecast from the Sofia, Bulgaria leg of the touring rock festival featuring all four groups. The presentation took place on April 23, 2011 at the first-ever “Big Four” concert on American soil at the Empire Polo Club in Indio, California.

“The Big Four: Live From Sofia, Bulgaria” debuted at No. 1 on the Billboard “Top Music Videos” sales chart in November with first-week sales of 22,000 copies. The set also debuted at No. 1 in Canada, the U.K. and Austria, while entering at No. 4 in Germany.

“The Big Four: Live From Sofia, Bulgaria” set features full shows from all four bands along with behind-the-scenes and interview footage.