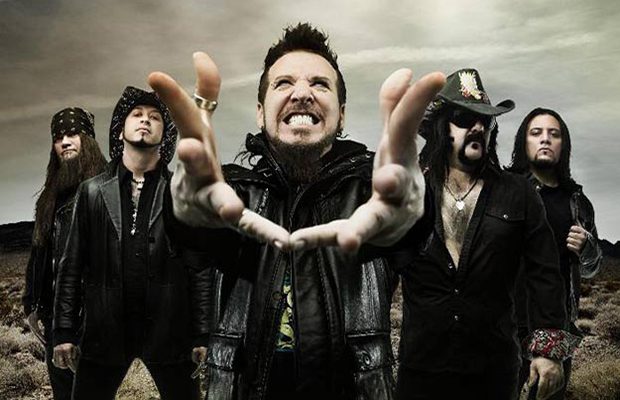 HELLYEAH is putting the finishing touches on its fourth studio album for a tentative late April release via Eleven Seven Music. The CD is being helmed by producer Kevin Churko at his The Hideout Recording Studio in Las Vegas, Nevada. Churko is the Canadian musician, sound engineer, songwriter and record producer who has previously worked with OZZY OSBOURNE, FIVE FINGER DEATH PUNCH and IN THIS MOMENT, among other acts.

Said Vinnie Paul: “It was an honor working with Kevin. He really pushed and got the best out of us. Everything we did on this record was from a different perspective.”

Added Churko: “They’ve really impressed me both with the tracks they brought in and with their drive to make them even better. I think they’ll really be delivering their best record yet — 2014 will be the year of HELLYEAH.”

In a recent interview, Vinnie Paul stated about HELLYEAH‘s plans for the next CD: “Everything [Kevin has] ever done is great. I feel like he really made Ozzy sound fresh again, [on 2007’s] ‘Black Rain’ especially. Sonically, [Kevin‘s] records are unbeatable, and he gets the best out of every band.

“We produced our last three albums ourselves, and we really feel like we did a good job on all that. But we feel it’s time to have an outside ear, somebody to give us an extra opinion; to be the sixth member of the band, so to speak. That extra dude that drags everything out of you.”

Vinnie also revealed that the new record’s overall sound would “continue in the direction” of 2012’s “Band Of Brothers”, which represented the first time that the members of the band fully embraced their musical roots.

“The first two records were pretty experimental for us,” Vinnie explained. “We really stepped outside of the box and did a lot of things that we couldn’t do in PANTERA or MUDVAYNE or NOTHINGFACE; songs like ‘Alcohaulin’ Ass’ just wouldn’t fly in those bands. It was really liberating to be able to do that, and touch on some rock and roll, some blues, almost country southern rock, stuff like that. But with ‘Band Of Brothers’, we really wanted to get back to our roots and felt like it was time for all of us to bring the different things we brought to our previous bands into HELLYEAH, and not be afraid of it.”

“Band Of Brothers” sold 19,000 copies in the United States in its first week of release to debut at position No. 19 on The Billboard 200 chart.