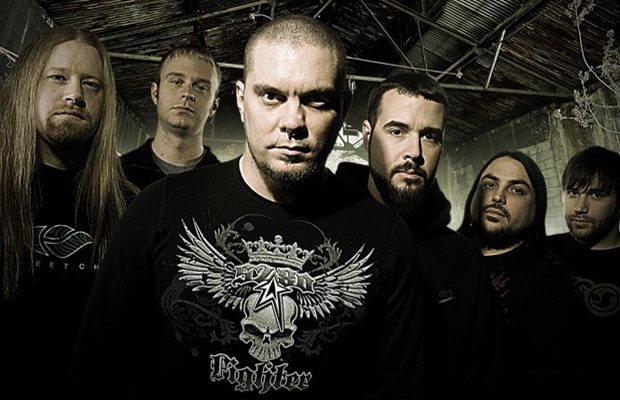 CHIMAIRA‘s video for the song “Wrapped In Violence” can be seen below. The track is taken from the band’s seventh studio album, “Crown Of Phantoms”, which sold around 7,400 copies in the United States in its first week of release to land at position No. 52 on The Billboard 200 chart. The record arrived in stores on July 30, 2013 via eOne Music.

CHIMAIRA made last year headlines by way of crowd-funding a fan version CD/DVD where they doubled their initial goal via IndieGoGo.

CHIMAIRA will kick off the “Celebrate The Chaos” tour this weekend. The trek will feature support from IWRESTLEDABEARONCE, OCEANO, REFLECTIONS and FIT FOR AN AUTOPSY.

Comments CHIMAIRA vocalist Mark Hunter: “CHIMAIRA turned fifteen last August and the only appropriate way to celebrate the chaos is to hit the road. Take a trip through the entire catalog with us and rediscover old favorites in the new era of domination! Rise up! The time has come…”

In an interview with Ghost Cult, Hunter stated about CHIMAIRA‘s new CD: “‘Crown Of Phantoms’ is the culmination of three years of going through tons of changes, harsh realities but also excitement. It’s something brand new and when you put all those things together you get ‘Crown Of Phantoms’ as a result. These are exciting times for the band and it’s the polar opposite of where I was with the band two years ago.”

Regarding whether he thought of packing it in after the numerous lineup changes that CHIMAIRA went through since the release of 2011’s “The Age Of Hell”, Hunter said: “Many people on the Internet thought we were done for. By the timing and the speed things were unraveling, I had the luxury of not thinking rationally and I simply soldiered on. It was happening so fast and not thinking about quitting was a sort of defense in a way. I defended what I hold dear and what I wanted to fight for. Of course there were moments of insecurity and doubts. Luckily, I had a good team and a good support system of friends and family around me telling me that I was crazy if I wanted to change the band name or quit altogether. They pointed out that bands like MEGADETH and BLACK SABBATH went through countless lineup changes. BLACK SABBATH had a super successful era without Ozzy. Of course, with MEGADETH, ‘Rust In Peace’ was one of their best albums and it wasn’t recorded with the same lineup who did ‘Peace Sells’, which is another MEGADETH classic. There are more examples of bands that went through major lineup changes and still had major success. Of course, to be in this situation is scary as hell.”