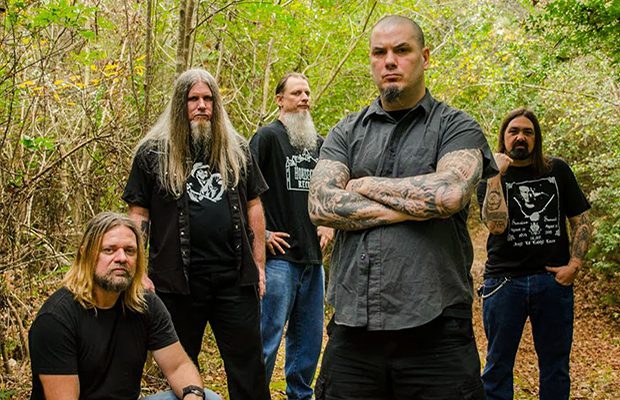 DOWN has been confirmed as the “first special guest” on this year’s Revolver Golden Gods Tour, presented by Epiphone. The trek, which will be headlined by BLACK LABEL SOCIETY, will kick off on April 16 in Portland and wrap up on June 7 in Los Angeles. Also rumored to be appearing on the bill is DEVIL YOU KNOW, the new band featuring former KILLSWITCH ENGAGE singer Howard Jones; Francesco Artusato, celebrated solo artist and guitarist with ALL SHALL PERISH and THE FRANCESCO ARTUSATO PROJECT; and John Sankey, drummer for the Australian band DEVOLVED, who has also worked with FEAR FACTORY and DIVINE HERESY.

DOWN has completed work on its new EP for a spring release. The CD was recorded at singer Philip Anselmo‘s New Orleans studio, Nodferatu’s Lair and is the second in a series of EPs to be released over the next few years, each touching on a different aspect of the band’s sound.

Speaking about the band’s new material, DOWN guitarist Pepper Keenan told the “Metal Hammer” radio show: “It’s kind of slight continuation of the first EP, but it’s a little bit more… It’s hard to say, man… It’s more… I wouldn’t say ‘aggressive,’ but it’s definitely got some freaky guitar stuff on it. And it’s definitely got a pretty good groove factor. And we spent a lot of time trying to make all the songs [fit together stylistically]. We had several songs that didn’t quite match it, so we kind of [set them aside] and we’re gonna move them to another EP. But it’s got a super-heavy vibe to it, man. I mean, I’m really excited about it. Everybody in the band is excited about it.”

He continued: “We wrote it kind of like we did the ‘NOLA’ record. Each one of us had some riffs and we got in a room and we just hashed it out like the old days — just going off each person’s experiences and ideas. Everybody’s ideas were valid, and it really ended up being well rounded and slamming. It was [a] very creative [process], let’s put it that way. Actually, it was surprising some of us how much we really still got it.”

Pepper also spoke about the cover theme for the next DOWN EP and how it will be connected to last year’s “Down IV Part I – The Purple EP”.

“When the second [EP] comes out, you’ll see it as being an extension of the last cover,” Pepper said. “So number 2 is gonna connect sideways to number 1, and you’ll start to see a morphing kind of process. There’s some kind of liquid light kind of thing that’s kind of melding across as you go… I hate to quote the overall color, but I believe it’s something like orange. I haven’t looked at it in a while. It might not be orange yet, but it’s heading in that direction.”

“I couldn’t feel more blessed,” Landgraf, 48, said in an interview. “Phil could’ve gotten anyone to play guitar, but I’ve been jamming with them during soundchecks, so they know we can play together.”

“It’s really a dream come true,” added Landgraf. “It’s what you’re working for all those years.”

The new BLACK LABEL SOCIETY studio album, “Catacombs Of The Black Vatican”, will be released in Europe on April 7 via Mascot Label Group and one day later in North America through eOne Music.