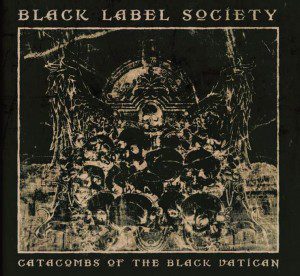 “Catacombs of the Black Vatican“. When I first heard of this title I thought of a Dan Brown novel. But no! This is the title of the new album by Black Label Society. The band needs no introduction so I’m jumping right into more interesting things. What is “Catacombs of the Black Vatican”? According to Zakk Wylde “It’s all going to be all completely the same as the last nine records, except just different song titles”. So, let’s see if this is true.

After the acoustic “Unblackened” of 2013, Black Label Society return with an album that’s heavy and has you headbanging in no time. The new album certainly follows the same path as the rest of the BLS works, combing Black Sabbath inspired riffs and the southern rock vibe. And why change it? “If it ain’t broken, don’t fix it”. “Catacombs of the Black Vatican” is not a carbon copy of the band’s past work though. Wylde and company combine good time arena rockers with bluesy mid-tempo tracks and a few ballads. And while the songwriting is in line with the rest of the releases, Zakk Wylde seems to have spent extra time on the melodies. In here you will find some of the best hooks he’s written. And of course the instrument that’s improved steadily over the years is his voice. That’s especially evident on the ballads. His voice has gained a lot of texture and emotion and maybe the acoustic recording had a lot to do with it.

Let’s take a closer look on tracks. “Catacombs of the Black Vatican” starts powerfully with strong riffs in “Fields of Unforgiveness“, the single “My Dying Time” and the more Black Sabbath-y “Believe“. Next comes the ballad “Angel of Mercy” with an amazing string section; a track which I believe will do rather well in live sing alongs. The raging Black label Society comes forth in “Heart of Darkness” and “Damn the Flood”; heavy and up-tempo with plenty of Wylde’s guitar wizardry and snarling vocals. Drums and bass come forward in “Beyond the Down“, with a solid rhythm section that comes in contrast with Wylde’s vocals. “Scars” again returns to acoustic, almost Southern Rock settings, with some haunting vocals from Zakk, piano melodies and a mesmerizing guitar solo. The memorable and melodic “I’ve Gone Away” contains some heavy riffs to go along with alluring vocals, and “Empty Promises” slows things down a tad, as this mid paced rocker echoes Led Zeppelin, Black Sabbath, and Lynyrd Skynyrd, with some superb drumming from Szeliga complementing Wylde & Lorina’s grinding doom/hard rock riffs. The albums ends on a softer note and a passionate delivery from Wylde, with “Shades of Gray“, a bluesy, almost 7 minutes track.

Black Label Society has been one of the most consistent through the years. Perhaps containing a bit more variety than we’ve seen from Black Label Society in the past, “Catacombs of the Black Vatican” is a very solid release, and shows the band still has plenty of fire in their gut and tricks up their sleeve. However I don’t think that BLS are going to be winning over too many new fans. But Zakk Wylde knows his audience. He knows what his fans want and he knows how to deliver that the best possible way.