BRIAN JOHNSON Says AC/DC Will Enter Studio In May 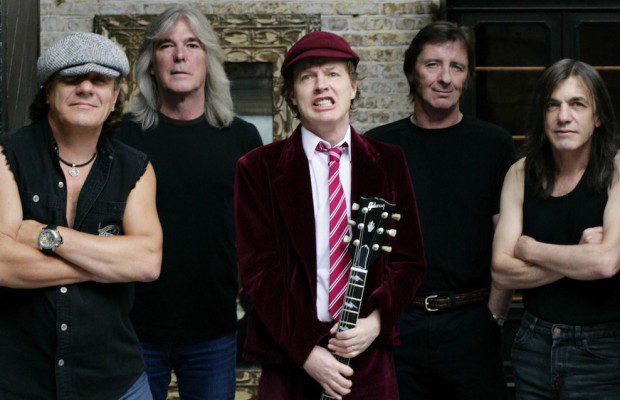 Legendary Anglo-Australian hard rockers AC/DC will enter a studio in Vancouver, British Columbia, Canada in May, presumably to begin recording their first new material since 2008’s “Black Ice” album. In addition, the band will celebrate its 40th anniversary this year by playing 40 shows around the world.

The news of AC/DC‘s recording and touring plans was revealed earlier today (Friday, February 14) by the band’s lead singer, Brian Johnson, during a surprise phone call he gave to Andy Preston of the 98.7 The Gater radio station in West Palm Beach, Florida (hear audio below).

Asked if AC/DC is planning to do anything this year, Johnson told Preston: “Well, you’ll be the first one to know, really, because we’ve been denying anything, ’cause we weren’t sure. One of our boys was pretty ill, so we didn’t like to say anything, and we’re very private about things like this, so we didn’t wanna say anything. And he’s a very proud man. But I think we’ll be going into the studio in May in Vancouver. Which means, we should be getting ready.

“It’s been 40 years of the band’s existence, so I think we’re gonna try to do 40 gigs, 40 shows, to thank the fans for their undying loyalty. I mean, honestly, our fans are just the best in the world, and we appreciate every one of them. So, like I said, we’ll have to go out, even though we’re getting a bit long in the tooth. [laughs]”

He added: “You know what?! It’s been four years [since we last went out on the road], and I’m really looking forward to it.”

During a January 2012 appearance on “The Cowhead Show”, the American radio program hosted by Mike “Cowhead” Calta, Johnson revealed that health issues were affecting one of his bandmates, which may have put new album plans temporarily on hold. “One of the boys is a little sick and I can’t say anything, but he’s getting better,” Brian said. “He’s doing wonderful. Full recovery fully expected.”

AC/DC bassist Cliff Williams told BackstageAxxess.com in a March 2013 interview that guitarists Malcolm and Angus Young were writing songs for the band’s next album. But Williams said that at the time that there was still a long way to go, explaining, “[There is] nothing in the works right now [as far as recording]. We’re still getting over the last tour, so we’re just hanging out and doing stuff. The guys are writing material and when they’ve got some stuff together, they’ll give us a holler.”

Asked how the band’s creative process works, Williams said, “[Angus and Malcolm] get a bunch of ideas together. Some are more together than others — and then we’ll all hit the studio or a little rehearsal room and we’ll kick it around with a producer. And then we get in a studio and record, and that’s kind of how it runs.”

“Black Ice” was followed by a nearly two-year world tour.

Malcolm Young told Classic Rock magazine in 2012, “I’ve been doing some jamming on some song ideas but I do that all the time, as do the rest of the band . . . I think we need a couple of years to recuperate and work on it a bit more.”

Regarding AC/DC‘s plans to tour in support of the upcoming CD, Brian told the Bay Area rock station 107.7 The Bone in a June 2012 interview: “Well, I think it wouldn’t be like the last one. That was two years. I mean, that was just nuts. We were just fragged when we finished [that one]. I mean, it took about three weeks to get over it. But it was so much fun, though. For guys our age at the time, to tour the world to sellout audiences everywhere, it gives you a good feeling. And the great thing was to look out into the audiences and have a look at the generations of people… I mean, it was unbelievable… Kids there that were 7-8 [years old], teenagers…”

Johnson also spoke about how AC/DC decides which recording and touring projects to take on, telling 107.7 The Bone: “We’re just a bunch of pals from the projects, still. Even though we’ve done well, we still have the same roots that we stick by that we did when we had nothing, basically. And that’s the work ethic. And it has to be right for the boys to do anything. When we’re sitting down and [we’re talking about], ‘Can we do this? We’re not gonna be a pale shadow of our former selves?’ We’ll talk about it and make sure that we’ve all got it. We’re just five pieces of a card, and if one of us is not really [able to perform at 100 percent], the whole thing would just collapse, I think.”