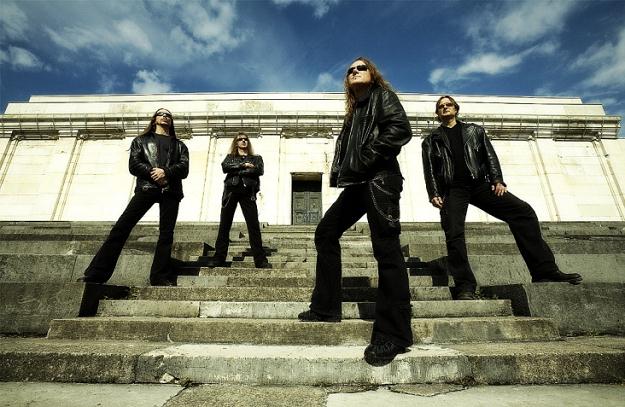 German power metallers GAMMA RAY will release their eleventh studio album, “Empire Of The Undead”, on CD, CD/DVD digipack, LP and digitally via earMusic on March 28.

The “Empire Of The Undead” title track was already been made available on the single/EP “Master Of Confusion”, an appetizer the band released in 2013, just before touring the world with HELLOWEEN.

GAMMA RAY recorded the new album in various sessions in 2013, with Eike Freese at the mixing desk alongside bass player and co-writer Dirk Schlaechter.

It was just after landing in South America that the unbelievable news reached GAMMA RAY mainman Kai Hansen and his bandmates: Hammer Studio, their home, rehearsal place, studio and meeting point for many metal bands in Germany, including their instruments, amps and tapes, had been destroyed by a terrifying fire.

GAMMA RAY will embark on the “Empire Of The Undead” tour in March, with special guests RHAPSODY OF FIRE.

The complete track listing for each “Empire Of The Undead” format can be found at GammaRay.org.

The CD and DVD contained in the CD/DVD digipack will feature the following:

A new “Empire Of The Undead” trailer can be seen below.

“Master Of Confusion” was released on March 15, 2013 via earMUSIC, the Hamburg, Germany-based international rock label which is part of Edel Group.

The release is not free from tasty rarities: a brand new studio cover versions of British glam rock band SWEET (“Lost Angels” — “the reason I have joined a band many years ago,” stated GAMMA RAY frontman Kai Hansen) and a hidden treasure of NWOBHM (“Death Or Glory” by HOLOCAUST).

“Master Of Confusion” is rounded off with six live versions (“The Spirit”, “Wings Of Destiny”, “Farewell”, “Gamma Ray”, “Time To Break Free” and “Insurrection”, recorded in Bochum) that were already included on the Blu-ray “Skeletons & Majesties Live” but were not featured on the CD release (which included the show recorded in Pratteln).