Ex-JUDAS PRIEST Guitarist K.K. DOWNING Doesn’t Miss Touring, Says It Would Be ‘Difficult’ To Go Back Into ‘Songwriting’ Mode 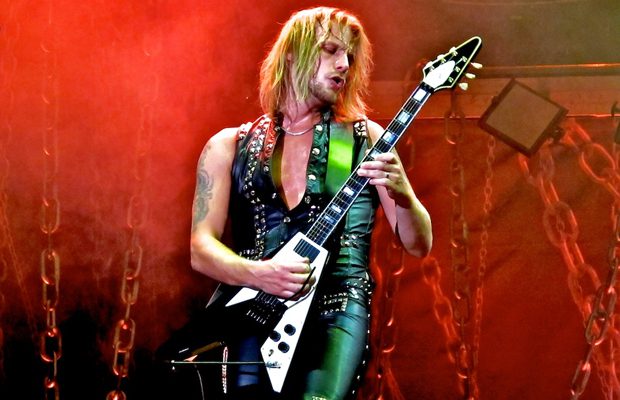 MetalTalk.net recently conducted an interview with former JUDAS PRIEST guitarist Kenneth “K.K.” Downing. You can now watch the chat in three parts below. A couple of excerpts follows (transcribed by BLABBERMOUTH.NET).

On whether he missed being on the road and playing music for the fans:

Downing: “People say to me all the time, they say, ‘Well, do you miss it? Go on. I know that you miss it.’ And my response is the fact that after a 40-year full-on career of going non-stop, then I’m not going to miss it in the first week or month or even a year. But I guess there will come a time where I will probably think…

“I just received a really nice letter today from a guy in Costa Rica. And it was really nice to read the letter, saying that he kind of missed me in PRIEST and stuff like that. And when that happens, then it does become more and more difficult for me to take the fact that I’m no longer a part of all that. And who knows what the future holds? I mean, I don’t know.

“I guess, in the scheme of things, I still consider myself to be relatively young and strong, dare I say that. And, as they say, maybe there’s plenty of life left in the old dog. Who knows? But it was a long career, and the way that the industry has gone, certainly not for the better, but, obviously, as everyone knows, live performances are still fanstastically…

“If nothing else, I think that the validity of live touring and performances is stronger and more in demand than ever, really. So that’s very, very healthy. At least everybody can go out there and do some live performances. And that’s what bands enjoy best anyway.”

On whether he keeps in touch with his former JUDAS PRIEST bandmates:

Downing: “A little bit here and there. It was just one of those situations. It’s a long time — 40 years is a long, long time…

“It would certainly be difficult for me to go back into a ‘songwriting and record’ mode, I think, because of… I think of how much, when I look back, of how much has been achieved in that amount of time, the task of trying to get bigger and better and more unique becomes more and more of a monumental task. And I must say that when I go and see favorite bands of mine, I want them to play the songs that I know and I love, not the songs that I haven’t heard yet. Will I get to grow to like these [new songs]? Well, yes, maybe. But certainly, in a live performance, you wanna rock out and sing along.”

On the highlights of his time with JUDAS PRIEST:

Downing: “Probably all of it. It’s like anything else. I always kind of think of, like, what’s the worst and the best holiday you’ve ever had? If somebody had a really disastrous holiday, and you asked that person what were the highlights of that holiday years later, they probably would have said the worst things that happened were good highlights, as well as the best things. So, lots of laughs and lots of tear and the whole thing. Just collectively put together, very, very fondly cherished memories… You know, cleaning your teeth in the snow. On the side of a field in Norway, and I can remember… And it did happen, it did happen, before you get to go back to sleep in the back of the van. [The fact] that we probably had a few beers before helps things a little bit. The party has to go on.”

On whether JUDAS PRIEST were ever hard partiers back in the early years:

Downing: “I guess, in all honesty, we partied enough, that’s for sure, but certainly not as much as a lot of bands did. And I think that’s mainly because we had this, kind of, second sense that if we really mess… I was gonna say the ‘F’ word then… but if we really did mess up badly in certain ways, it would have affected our ability to go on and be what we always were — a very hard-working, level-headed band, really. But in between that, we were partying whenever we could. But nowhere near as bad as we could have been, that’s for sure.”

Downing in 2011 shot down as “inaccurate” reports that he left JUDAS PRIEST because he chose to concentrate on running the 18- and nine-hole golf courses on his property.

Downing, who is a founding member of the British heavy metal legends and was part of the group since 1969, announced his retirement from PRIEST in April 2011. He has since been replaced by Richie Faulkner, most recently guitarist in the backing band for Lauren Harris (daughter of IRON MAIDEN bassist Steve Harris).