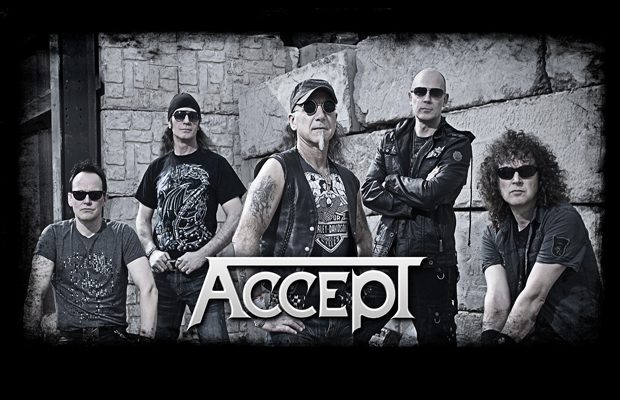 On March 10, journalist Mitch Lafon conducted an interview with ACCEPT and TT QUICK singer Mark Tornillo. You can now watch the chat below.

On the progress of the recording sessions for the new ACCEPT album:

“I literally finished singing the vocal tracks a week ago Sunday.”

On whether fans of the first two ACCEPT albums with Tornillo on vocals — 2010’s “Blood Of The Nations” and 2012’s “Stalingrad” — will be happy with the musical direction of the new ACCEPT album:

“Yeah, I would say. It’s more of the same, but even more of a classic feel than the other ones, I think. There’s some songs on this one, I think, that when you hear the opening riffs, you’re gonna go, ‘Wow! This could have been on ‘Balls To The Wall’. This could have been on ‘Metal Heart’.’ It’s just very classic-sounding stuff, classic-sounding ACCEPT stuff. But with a lot of very diverse things on this record as well. I mean, you’ve got the heavies and the double basses, but some things that, I think, are a little different.”

On whether the songwriting process for the new ACCEPT album was more comfortable for him, having done two albums already with the band prior to this one:

“It is more comfiortable for me. I think it’s a little more comfortable for everyone. ‘Stalingrad’ was the one, I think, that threw us all for a loop, more than anything, because we had set the bar so high with ‘Blood Of The Nations’. And we were really searching for a niche with ‘Blood Of The Nations’ still, searching for an identity for the band. So ‘Stalingrad’ was actually more of a challenge, I think, than this one was. We really kind of settled in with this one and are not afraid to take a chance here and there now too. So we’ll see what happens. I’m loving it. So I’m just hoping the fans will feel the same way.”

On the status of the the first official ACCEPT documentary, “Acceptology”, featuring footage from ACCEPT‘s humble beginnings as a garage band in their German home town of Solingen in the late ’70s, their ’80s “Balls To The Wall” “glory days,” and all the way up their most successful reincarnation with Tornillo:

“‘Acceptology’ is still being recorded. Actually, Stefan Kaufmann [former ACCEPT drummer and U.D.O. guitarist] is spearheading that whole project. So I know that we did some extensive video during the recording of this album that’s gonna be on some of that stuff. But there are two live DVDs now; there’s one from South America, and there’s one from Bang Your Head!!! festival last year in Germany. Now, the way I understand it, one of these is going to be released with the new album [as a bonus disc]. I’m not sure which one — I think possibly the German one; I don’t know all the details — but the way I understand it, there will be a live DVD with the new album. ‘Acceptology’, I’m not sure when that’s gonna be released and how it’s gonna be released.”

“We’ve talked about [doing some recording and scheduling some more dates]. There’s talk about us maybe doing a few shows, actually, this summer while I’m home. I’m gonna be here, now that we’re done with recording the new ACCEPT album, I’m gonna be in the neighborhood now until probably the end of July when we’re gonna start touring again [with ACCEPT]. So it gives us some time to do some TT QUICK stuff this summer. David [Dipietro, TT QUICK guitarist] and I have actually been throwing ideas back and forth, so there’s a good possibility we may just do an EP, release it digitally and see what happens.”

Tornillo‘s pre-ACCEPT band TT QUICK will reunite once again for a performance at the “Rock N’ Roll Heaven Presents” event on May 3 at Starland Ballroom in Sayreville, New Jersey. Also appearing on the bill will be KING’S X, THE ATOMIC BITCHWAX and the BLACK SABBATH cover band BLACK REIGN.

This time around, TT QUICK will play a full set after their “teaser” appearance at Rock N’ Roll Heaven and the Old Bridge Metal Militia‘s reunion concert and fundraiser in May 2013 to benefit the victims of Superstorm Sandy.

TT QUICK was a popular club band during the 1980s in the New York and New Jersey area and was known for the guitar work of David Dipietro and the powerful vocals of Mark Tornillo. Dipietro‘s skills were especially singled out as he had given lessons to both Zakk Wylde of the OZZY OSBOURNE band and SKID ROW‘s Dave Sabo.

TT QUICK disbanded and later reunited sporadically and released a few more albums, including a live CD from one of their reunion gigs (“Thrown Together Live”) and a studio effort, “Ink”, which came out in 2000.