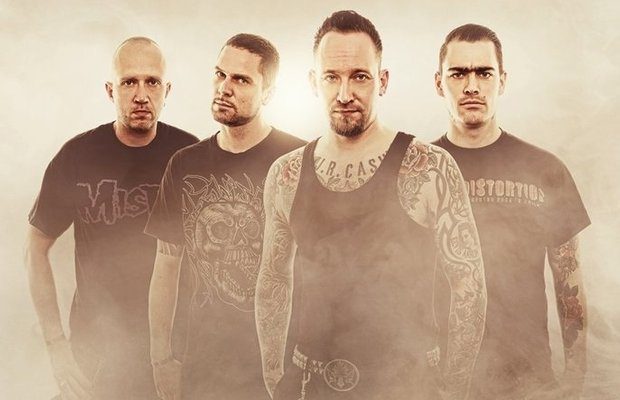 Danish/American rockers VOLBEAT were honored in the “Rock/Alternative International” category at this year’s Echo music awards, Germany’s equivalent of the Grammy awards, which was held March 27 in Berlin. Video footage of their acceptance speech can be seen below. Also nominated in the “Rock/Alternative International” category were 30 SECONDS TO MARS, PLACEBO, IMAGINE DRAGONS and BLACK SABBATH.

VOLBEAT‘s latest album, “Outlaw Gentlemen & Shady Ladies”, was re-released in a special “tour edition” on November 4, 2013. The new version of the act’s fifth studio album contains new bonus tracks and a live DVD. The latter features footage of the group performing at a number of major summer festivals in Europe, including the Download festival in the U.K., Rock Am Ring and Rock’n’Heim in Germany, Hellfest in France and Denmark’s Roskilde Festival.

“Outlaw Gentlemen & Shady Ladies” debuted at No. 1 in several countries when it arrived in April 2012, with the disc entering the Billboard album chart at No. 9.

“Outlaw Gentlemen & Shady Ladies” has sold more than 185,000 copies in the United States, according to Nielsen SoundScan.

VOLBEAT will return to North America on April 3 for a tour that brings the Danish/American quartet coast to coast. The run begins at The Fillmore in Denver, Colorado and will wrap the second week of May on the East Coast, with TRIVIUM and DIGITAL SUMMER supporting.

The upcoming tour marks VOLBEAT‘s fourth visit to North American this album cycle, and follows an excursion as headliners of the Monster Energy Rock Allegiance Tour in August and September 2013. This past year, the band has been one of the largest touring draws on the European continent headlining both festivals and a arena tour, and they appeared at the major Japanese festival Summer Sonic 2013 in both Tokyo and Osaka. Cumulatively, VOLBEAT has performed for over a million fans since the current album was released.