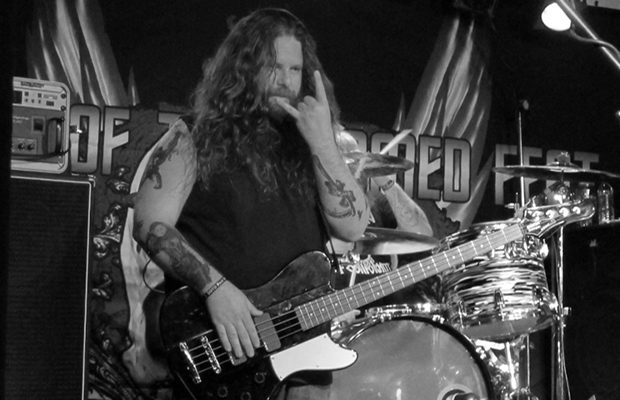 Jason McCash, former bassist, co-songwriter and co-lyricist for Indianapolis doomsters THE GATES OF SLUMBER, has reportedly passed away. He was 37 years old.

In a posting on Facebook, THE GATES OF SLUMBER vocalist/guitarist Karl Simon wrote: “My best friend died last night.

“There will be no reunion — no more of THE GATES OF SLUMBER. It’s dead beyond dead, and I’ve lost a brother.

“Please be respectful or silent. It’s a small world and I’m still alive. Remember that shit.”

McCash announced his departure from THE GATES OF SLUMBER last September, explaining that it was “just time for me to leave.”

THE GATES OF SLUMBER‘s “Death March” video can be seen below. The song comes off the band’s “Stormcrow” EP, which was released on January 29, 2013 via Scion Audio/Visual, (a.k.a. Scion A/V), the in-house record label and lifestyle marketing division of the Scion marque produced by Toyota Motor Corporation for the North American market. The CD was recorded by Sanford Parker and it features cover artwork by Dave Quiggle.

THE GATES OF SLUMBER in 2012 parted amicably with drummer J. Clyde Paradis, who recorded and toured behind the 2011 album “The Wretch” (Rise Above Records).

THE GATES OF SLUMBER started in 1998 as a backlash against the stoner rock trend prevalent at the time and with their mixture of BLACK SABBATH, SAINT VITUS, PENTAGRAM, and prime-era CELTIC FROST, the band has crushed or converted unbelievers ever since.

“The Wretch” was released in May 2011 via Rise Above/Metal Blade. The CD was recorded at England’s Orgone Studios with producer Jaime Gomez Arellano (GHOST, ANGEL WITCH).