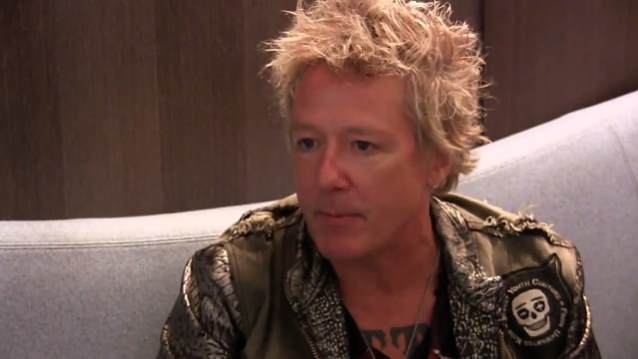 According to The National, SCORPIONS drummer James Kottak will spend a month in a Dubai, United Arab Emirates jail after he was convicted on Tuesday morning of insulting Islam.

The 51-year-old American musician had reportedly consumed five glasses of wine on an April 3 flight from Moscow to Dubai while travelling to Bahrain on a Gulf Air flight to perform two days later at the country’s Formula One grand prix. After taking a wrong turn and entering the transit hall, Kottak “started swearing and talking about ‘non-educated Muslims’ before he flashed his middle finger at passengers,” according to witnesses. Police said he also lowered his trousers and showed people his behind.

An officer said he heard Kottak saying “what is this disgusting smell” before the drummer insulted Islam. “I didn’t see anything else but I heard him,” the officer said. “I then informed my supervisor, who came and took the defendant away.”

A 27-year-old client service employee at the airport added: “When he [Kottak] saw the Pakistani and Afghani passengers, he covered his nose and said that there was no way he will travel with them.” He added that the drummer then started swearing repeatedly at the arrivals area of Terminal 2. “He wasn’t talking to a person specifically but was talking in general,” the client service employee said. “He was very nervous at the time and talking loudly.”

A 25-year-old Jordanian passenger services agent said Kottak came over to her and “was shouting ‘non-educated Muslims’ then he went to the office of the head and flashed his middle finger at the passengers.”

Kottak denied that he insulted Islam, telling prosecutors: “I don’t remember saying these words and I did not flash my middle finger.” He also denied taking down his trousers, saying: “This is not true — I just lifted my shirt up to show the tattoo on my back” as a “spontaneous act.” “There is no way that I would say such a phrase about Muslims, whether I was drunk or not,” he said.

“I confess to drinking alcohol but I refuse the other two charges, I did not do them,” he added.

In addition to spending one month in jail, Kottak — who has been in custody since April 3 — was fined 2,000 dirhams (approximately $545) for drinking alcohol without a license.

Kottak‘s time spent in detention will be deducted from his sentence.

Because of his arrest, Kottak did not perform with his bandmates at the April 5 show at the 2014 Formula One Gulf Air Bahrain Grand Prix and was replaced at the gig by Mark Cross (TAINTED NATION, FIREWIND, OUTLOUD, HELLOWEEN, METALLIUM).

In a 2005 interview, Kottak, who has been in the SCORPIONS since 1996, stated about his audition for the band: “I was always a SCORPIONS fan for the songs on the radio because in America they played them non-stop. I was never the guy that went out and bought their records but I always liked their songwriting and the songs and the whole vibe. Then I was in a band called KINGDOM COME in 1987-1990 and we opened for the SCORPIONS and I saw them and they were so professional on the Monsters Of Rock tour, [and] I was totally blown away. But I never went out and bought their albums, I never went out and bought any other albums either. I was a fan of all music — good or bad. It was on the radio so much, I didn’t need to buy it. I spent all my money buying drums, drumsticks and cymbals. In the audition, I knew most of the SCORPIONS music from playing in cover bands. I’m from Louisville, Kentucky. That’s how I earned my money in the early ’80s — we played ‘Still Loving You’, ‘Rock You Like a Hurricane’, ‘Big City Nights’. The flattering point with the SCORPIONS [was] when I did fly to Germany for the ‘audition,’ it wasn’t so much an audition, more like, ‘Let’s get together and see how it feels.’ So, I was very flattered about that because they did audition like another 25 drummers. I was very flattered to be picked.”