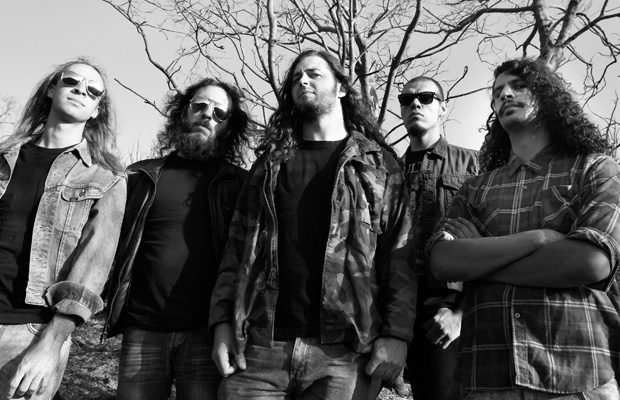 “So, guys, all our fans and supporters, Kevill here up way too late drinkin’, there’s some bad news and as our awesome fans you guys deserve to know. I don’t feel right about our prolonged silence on this issue and I think it’s time we clear things up.

“Drummer for the third and fouth records, Carlos Cruz, and founding guitarist John Laux have left the band. This is a huge and devastating blow to us, and it makes even my own self doubt our future.

“Carlos made great contributions on the last two records, and John Laux started the band with me; we wrote our first songs together.

“The more astute listeners have noticed this, as our last tour we did not have either of them on board.

“As for the whys, I don’t entirely understand it myself, so I can’t provide a decent explanation here. I really wish I understood more than I do.

“Still remaining is myself, founding member Adam Carroll (he’s back) and bassist of the fourth record, Ben Mottsman.

“This is why you haven’t heard much from us lately, why the nonstop touring machine has grinded to a halt, and why any updates here are more about the past than they are of the future.

“Honestly I have my own doubts on if we can continue, or if it will be right if we do. At the same time, I started this band out of high school, it is my first and only band, and everything I feel I’ve accomplished in life that I can really be proud of is tied to this in one way or another. I have plenty of ideas left, and Adam has a million sweet riffs, and to be honest, I never wanted this to be over, I wanted to tour straight through the fourth album and go onto the fifth. I felt like this band has evolved on every album, developed its own brand of ripping thrash metal, and I only wanted to continue that further.

“So I need to ask all you guys, what do you think of this? In light of all I just said, do you want to hear another WARBRINGER record, or come see us again? Basically, are you guys still with us?

“At any rate, if you listen to any of the music we have made, remember to play it loud. Whatever the outcome may be, keep rocking.”