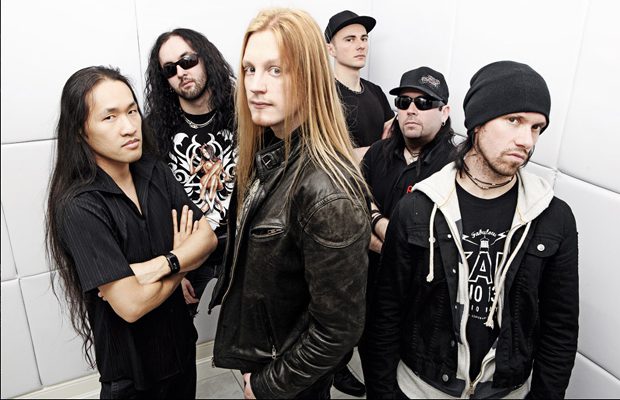 A native of Turin, Italy, Gee is a drum teacher who graduated from the NAMM Academy of Milan and carries on the well established multi-national mix of musicians that make up DRAGONFORCE.

Gee will make his live debut with DRAGONFORCE on the forthcoming “Maximum Overload” U.K. tour, which commences on September 17 in Edinburgh.

Dave is moving on to pastures new to focus on his first musical love, which is progressive rock. He says in a statement: “After much thought, I have parted ways with the boys in DRAGONFORCE to pursue my first love of progressive rock. I wish the lads all the luck in the world and look forward to the release of ‘Maximum Overload’ as I truly believe this is the most fantastic DRAGONFORCE album that I and the boys have recorded to date!

“Many thanks to all the fans who have supported me in this last decade of massive tours, countless shows and all the albums. I couldn’t have done it without you.

“I will continue to tour and play with some of the greatest names in prog rock, and hope to see some familiar faces on the road!

“In the meantime, stay metal, watch out for the new Dave Mackintosh web site which will be launched within the next four weeks as well as some great new videos I will be producing with my gear sponsors.”

Added DRAGONFORCE guitarist Herman Li: “We have been through a lot with Dave and want to thank him for everything he has contributed to DRAGONFORCE, both as a friend and musician, and we would all like to wish him well with his new project.”

DRAGONFORCE will release its new album, “Maximum Overload”, on August 19 in North America via Metal Blade and August 18 in Europe through earMUSIC, the Hamburg, Germany-based international rock label which is part of Edel Group. The CD was recorded at Fascination Street studios in Örebro, Sweden with Jens Bogren, who has previously worked with OPETH, THE DEVIN TOWNSEND PROJECT, AMON AMARTH, KATATONIA, SOILWORK and SYMPHONY X, to name a few. It marks the band’s first-ever album involving an outside producer, having historically opted to record themselves in association with Karl Groom.

“Maximum Overload” also features an all time first for DRAGONFORCE… a cover version! Guitarist Sam Totman explained: “Just before the last Australian tour, our manager suggested it might be interesting to do a cover for the next album, something we’ve always refused even to consider. Because we had all had a couple beers, every bandmember wrote down three songs each and we compared them all, just for a laugh. I wrote down ‘Ring Of Fire’ by Johnny Cash, an idea which the rest of the band loved, so we’ve DRAGONFORCE-ized it.”

“Maximum Overload” is the follow-up to 2012’s “The Power Within”, which was the band’s first with vocalist Marc Hudson. Since his live debut with the group in July 2011, Marc has gone on to front over 100 shows with DRAGONFORCE in 32 countries across the globe, including arenas with IRON MAIDEN as well as a mammoth headlining world tour to support the CD.

A demo version of a new DRAGONFORCE song called “Defenders”, featuring a guest appearance by TRIVIUM frontman Matt Heafy, can be streamed below.

“The Power Within” sold 5,800 copies in the United States in its first week of release to debut at position No. 74 on The Billboard 200 chart.