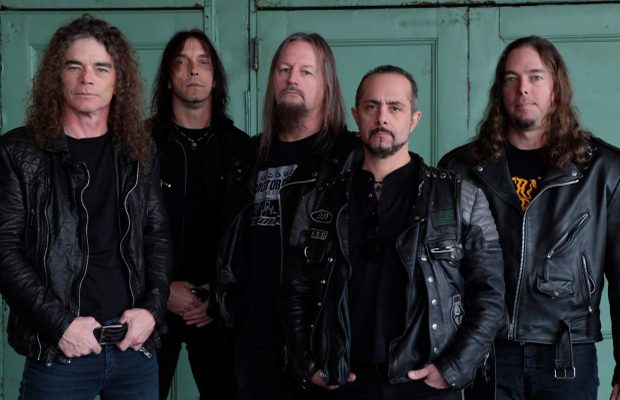 Says OVERKILL frontman Bobby “Blitz” Ellsworth: “[It’s] fantastic to have Kevin on board again. When he’s directing, the direction is intense!”

He adds: “Each time, the prior results have been spot-on, so our confidence is high for this shoot. From the director’s eye to yours/ours, should be a killer!”

“Bitter Pill” and “Armorist” are both taken from OVERKILL‘s new album, “White Devil Armory”, which will be released on July 22 in North America via eOne Music and on July 18 in Europe through Nuclear Blast Records. The effort was tracked at Gear Recording and was mixed by Greg Reely, who also worked on 2012’s “The Electric Age”.

The limited-edition box-set version of “White Devil Armory” includes a digipack CD, a leather belt and buckle plus a certificate of authenticity. It is available for pre-order from Nuclear Blast.

The cover artwork for “White Devil Armory” can be seen below.

Speaking to Steppin’ Out magazine, OVERKILL vocalist Bobby “Blitz” Ellsworth stated about “White Devil Armory”: “The new record has a blend of what we’ve done over the past half decade. I’m noticing it’s a more punchy heavy metal record with more dimension than the last record had. Where is it going to end up on the food chain? I really don’t know. But my feeling is it’s an eclectic collection of moments from us. ‘The Electric Age’ came across, to me, as kind of a two-dimensional thrash record. This one is punchy but has a whole different bunch of ways to go and things to hear on it.”

OVERKILL released a very special limited tour edition of “The Electric Age” in Europe on April 19, 2013 via Nuclear Blast Records. The limited 2CD tour edition included the regular album as well as a four additional live tracks on a bonus CD, recorded at The Metro in Sidney, Australia on September 25, 2010.