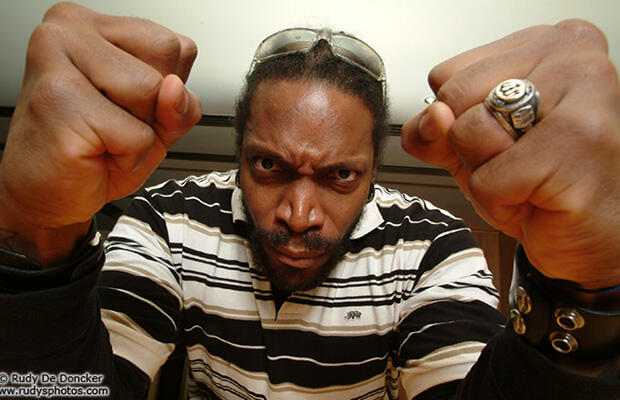 Manos SpanosJune 28, 2014
SEPULTURA frontman Derrick Green, an American national who has called Brazil home for most of the last 16 years, says it is "good" that people are criticizing the Brazilian government for spending billions on hosting a football tournament when that money could be better directed towards alleviating poverty. According to CNN, the Brazilian government puts expenditure in terms of funds, loans and credit lines from the public purse for World Cup-related stadium projects at at $3.5 billion. But a recent audit suggested the price had escalated to $4.2 billion. Total investments in the 2014 FIFA World Cup by the Brazilian government reportedly amounts to $11.2 billion. Speaking to LoudTV.net at last weekend's Hellfest in Clisson, France, Green said about protests from Brazilian activists interested in drawing attention to their country's persistent problems of poverty and inequality: "A lot of the stuff that people are talking about, it's good, because the fact is that a lot of the money and everything has been going into the wrong places. And especially, they shouldn't have been having a World Cup there — even though it's the biggest dream of a Brazilian to have a World Cup in Brazil. But I don't think a lot of people realized what FIFA [soccer's world governing body] was about. And that's a big problem. I mean, if you look at the history of FIFA and what it's done to certain places, you would really understand how wrong it can go. But it's gone horribly gone there [in Brazil], because it was already corrupted to begin with, and when you add those two together, it's just gonna be an even bigger amount of corruption. So all those things that people are talking about, it's good that people are actually talking about and kind of waking up Brazilians, because there's a lot of things that were problematic way before the World Cup that I recognized, just being an outsider so it's easier for me to see those different things, especially coming from the U.S., where they have their own problems as well. But the first time entering Brazil, I realized, I was, like, 'Wow. There's a lot of education that's needed,' number one, with hospitals and all this stuff." He continued: "People get psyched on the propaganda of the World Cup and everything. It's the biggest sport in the world and, of course, Brazil has been a five-time champion, so it's in the blood of Brazilians. "It's unfortunate that all this money was wasted on… I feel… I'm a fan of sports and everything, but I'm not fanatical, and I understand there's much more important things that are needed in the country than a football stadium that nobody's going to go to after the World Cup is done. It's just a strong wake-up call, like I was saying. But hopefully people will see things differently now…. "Like I was saying, coming from the U.S., where they designed that whole idea of mass propaganda — it's such a genius way to manipulate people, and it's neverending, but people don't understand the power that it has. And especially growing up in the U.S., you're bombarded by it every day where you become completely numb to what's really going on, and I grew up with that way. But living in Brazil now for almost, or being outside the U.S. for 16 years, I've really been able to see all these different changes and how effective it is." SEPULTURA's new album, "The Mediator Between Head And Hands Must Be The Heart", sold around 1,800 copies in the United States in its first week of release. The CD came out on October 29, 2013 via Nuclear Blast Records.
03 min read 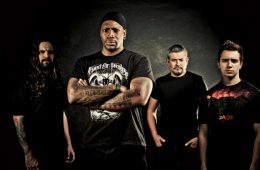 DERRICK GREEN: SEPULTURA ‘Has The Right To Keep The Name And Continue On’

Manos SpanosOctober 20, 2013
Live-Metal.net recently conducted an interview with vocalist Derrick Green of Brazilian/American metallers SEPULTURA. A couple of excerpts from the chat follow below. Live-Metal.net: Is that at all surprising to you that it's taken so long for fans to accept you into the band, even after seven albums, 10-15 years, or whatever it's been. And is it still a challenge every day to win back these older fans? Derrick Green: It's not really that surprising. A lot of times in the world of metal when you're a fanatical fan of a band that you really enjoy, it's hard to see certain changes happen. There have been a lot of changes in bands that I have loved in the past and they made changes happen. But being an artist, I understand a little bit more that those changes were inevitable sometimes. It's just life. It's just constantly changing, and it's just something that you have to deal with. As an adult and as a human being, those things are going to happen. When you look at life that way and there are changes that happen for a reason, you can kind of get beyond living in the past. But instead a lot of people do, and I do the same because there are things I'm going to always love. But I love from that time period — that time period when I discovered SEPULTURA and "Arise", and I had a cassette tape that a friend gave to me and it was amazing. And I cherish it, and it can never be replaced. It can never go back truly to that time. It would be silly to even think that. For me, I think the challenge for us is the fact that we love what we do. We never walk away from this band, we have always stuck to it and we always stayed focused on creating new music. And music that we wanted to do. Everything was a process, and we knew that it would take time to evolve, to know each other, to get to do it together, to create music together. We needed that time to bond, and I think it was all a process of evolving for us. And we wanted to get better with each album, and I think we've been doing that since we've been together. And for us, that's always been our goal, to really focus on music and leave all the other stuff behind. A consequence of just focusing and doing what we do and the drive and not giving up has brought a lot of new fans that have never seen SEPULTURA in any period of "Chaos A.D." or "Roots" or "Beneath The Remains". So we have those new fans that truly appreciate what we've been doing since I've been in the band. And then they go back and listen to old stuff, and they have an understanding, but they're not really kind of dwelling on the past. And then there's the old fans that we brought back who had lost touch with the band and are not really feeling the changes. But they still have that hope and that glimmer, and they still like good music. So I think that we're able to produce some good music that people are interested in hearing, so it's great to see that mix. And I know that we'll never be completely bringing back all the old fans, but that's never been my goal. Our whole goal has really just been to create and write great music.
08 min read

Manos SpanosOctober 3, 2013
Raymond Westland of Ghost Cult Magazine recently conducted an interview with vocalist Derrick Green of Brazilian/American thrashers SEPULTURA. A couple of excerpts from the chat follow below. Ghost Cult Magazine: "The Mediator Between Head And Hands Must Be The Heart" is very spirited and dark album. How come? Derrick: I don't know, really. The album was recorded in Venice Beach, California. A lot of the material was written in Sao Paulo [Brazil]. There were a lot of things going on at the time in the world. There was a new pope elected and there was a lot of social upheaval about the upcoming World Cup and Olympic Games, especially about all the corruption going. A lot of the money is invested in stadiums, while the populace are clamouring for hospitals and schools. A lot of it was coming from the things happening around us. Another major factor is our drummer,Eloy Casagrande. Writing music with him changed a lot. He really likes to play metal and he's really passionate about it. He's very young and the energy he brought with him pushed the rest of us to step up our game. He really wanted to leave his mark and that makes the new album very different from the previous one, I think. It was his dream to play in SEPULTURA and we really needed that type of kick and he really brought that. Ghost Cult Magazine: Ross Robinson produced the new album. He has quite a reputation of bringing bands to the edge mentally in order to capture the best performance possible. How did he go about with SEPULTURA? Derrick: He had a free pass with Andreas [Kisser, guitar] and Paulo [Xisto Pinto Jr.]. He already recorded with them during the "Roots" album, so he was already familiar with the inner workings of SEPULTURA. He talked with them how "Roots" changed his life and how it opened a lot of doors for him as a producer. With the second time around, he really wanted to make an album that was different from "Roots", but with that same type of energy. He already knew what we're capable of. He was there with us in the room while we recorded our instruments literally pushing us physically. He constantly asked why certain parts are there in a song and why certain words are there. We went through the lyrics together with everyone present in the room. This was something we never really did. I wrote the lyrics and I was done, just like that. He asked Eloy or Paulo what a certain lyric meant to them and whether they could identify themselves with it. Before we went in he would go and tell that he didn't feel the emotion behind a certain piece or lyric. He was, like, "Give it your all or don't go in at all." We're living in special times. The album is all about freedom and a lot of different energies and a lot of people are relying on our music to get through the day and help them cope with daily life. He urged us to really think about what we are doing, because we're an inspiration to a lot of people. By creating that feeling and vibe, he really got us to go as deep as we could. It really united the band in such a way that we didn't even know we could be capable of. It was a beautiful experience. Ghost Cult Magazine: I do think "Mediator" combines all the best elements from the bestSEPULTURA albums. It has the thrash metal elements from "Beneath The Remains" and"Arise", the groove from "Chaos A.D." and "Roots" and the punk attitude of the later albums…
05 min read 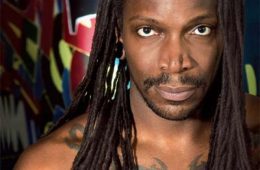