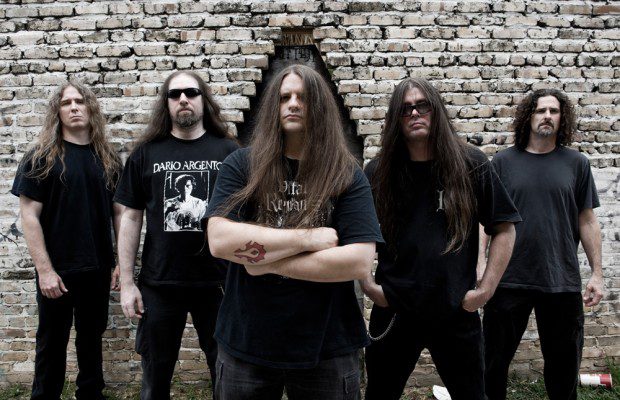 On June 25, bassist Alex Webster of Florida death metal veterans CANNIBAL CORPSE was interviewed by El Prezidente of 91.3FM WTSR‘s “The Chainsaw Symphony”. You can now listen to the chat in the YouTube clip below.

Webster also spoke about the CANNIBAL members’ family situations and how having kids is affected by the touring lifestyle.

“I’m married — no kids — but yeah, me and my wife have been together, married in 2001, and we were actually seeing each other since 1997,” Webster said. “So I’ve been very settled into that whole situation for a very long time now. The other guys… Like, George [‘Corpsegrinder’ Fisher, vocals] has been married a long time and has two daughters. Paul‘s [Mazurkiewicz, drums] married as well; he’s got a daughter. Rob [Barrett, guitar] has a wife, [but] no kids.

“Me and my wife never wanted to have kids; that was something we both agreed on long before we even got married, as a matter of fact. It’s the most important thing a person could ever do, so that decision shouldn’t be taken lightly. You’re creating a human being, so you have to really be in the right frame of mind for that. And my wife and I knew that we were never gonna be in the right frame of mind for that kind of a thing; it just wasn’t something that we were inclined to do. But for some people, it’s absolutely the right decision. You’ve gotta just think it over; it’s an important thing.”

CANNIBAL CORPSE will release its new album, “A Skeletal Domain”, on September 16 via Metal Blade Records. The band switched gears for the new CD, opting to work with producer Mark Lewis (THE BLACK DAHLIA MURDER, DEVILDRIVER) at Audiohammer Studios in Sanford, Florida, after having tracked their previous three outings (“Kill”, “Evisceration Plague”, “Torture”) with Erik Rutan.