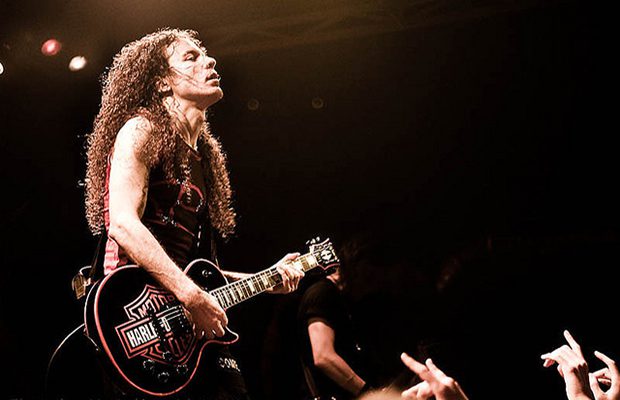 In a brand new interview with Wondering Sound, former MEGADETH guitarist Marty Friedman explained his decision to leave the band in 1999 in order to make the kind of music that he was passionate about: Japanese pop music, or J-Pop, which Friedman calls “embarrassingly happy.”

“I found myself touring with MEGADETH, and in my hotel room I’d be blasting this Japanese music all the time. What’s wrong with this picture?” he said.

As his interest in J-pop grew, Friedman started enjoying MEGADETH less. “I thought I was doing myself a disservice just playing the same old stuff and not really enjoying it,” he told Wondering Sound. “Making money from fans who want to see you play when you’re not into it didn’t really sit right with me.”

According to Marty, he simply outgrew metal, explaining that MEGADETH‘s music began to bore him, and he singled out the band’s popular ballad “A Tout Le Monde” as an example.

“The melody’s like duh duh duh duh, duh duh duh duh. It’s kind of the same thing over and over again,” he told NPR in a separate interview. “I’d go play the show at night with MEGADETH. And I’d be like, you know, what what I’m listening to is just so much more exciting than what I’m playing as my gig.”

Friedman told his MEGADETH bandmates that he would leave the group at the conclusion of a 16-month-long tour, but “only stayed three more months.” He explained to Wondering Sound: “It was just too much. I’m the kind of guy who can’t fake it that well. It wasn’t very nice, but I just couldn’t go on anymore.”

Focusing on the J-Pop genre, Friedman noted that going for the opposite of metal was the whole point.

“There’s not a whole lot of happy music going on,” he told NPR. “Especially in the heavy metal world, where everybody’s just trying to out-lame each other, you know, with darkness and monsters and crap like that.”

Marty‘s new solo album, “Inferno”, sold around 2,100 copies in the United States in its first week of release to debut at position No. 186 on The Billboard 200 chart. The CD was released on May 26 via Prosthetic Records (except in Japan, where the album was made available through Universal Music).