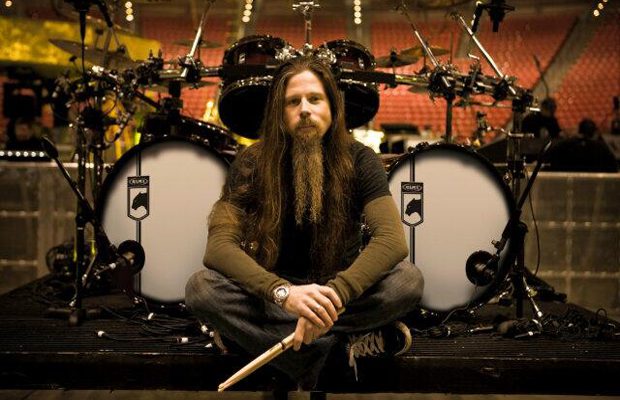 Rashod Ollison of The Virginian-Pilot recently conducted an interview with drummer Chris Adler of Richmond, Virginia-based metallers LAMB OF GOD. A few excerpts from the chat follow below.

On LAMB OF GOD singer Randy Blythe‘s arrest in the Czech Republic in June 2012 on manslaughter charges and the subsequent legal ordeal, which took more than eight months to play out:

Adler: “Not only were we not able to generate any income, but we ended up having to pay more than half a million dollars in legal fees. It bankrupted the entire band; [there was] no money left for any kind of payroll or anything. When Randy was acquitted [in March of this year], everything was on the line at that point. Either it was completely over, or we had a chance to get back out there and pay these bills and get ourselves back on our feet.”

On what he did during LAMB OF GOD‘s hiatus from touring, including playing drums on an album by the metal band PROTEST THE HERO:

Adler: “We have kids now, and it was nice to spend that time at home. But in the back of your head, it’s always nagging you: Is my career over? What am I gonna do now? I love this job. Every night is a Friday night, and when that’s threatened, you get scared.”

On the reception for Blythe and the rest of the band:

Adler: “In the metal community, we have a lot of sympathy and understanding. A lot of people are coming together to support us, knowing the kind of music we’re playing and knowing this kind of accident could happen to them.

“From an outsider’s view, this is just an example of how metal could be dangerous or harmful in some way, and that’s unfortunate. But after this, we’re going to be some kind of advocate for concert safety and try to make that stereotype very untrue.”

On LAMB OF GOD‘s plan to stick to the no-frills, groove-oriented formula that has garnered the group a cult following:

Adler: “We didn’t begin this because we thought it was going to be popular. We just did the kind of stuff we listened to when we were kids and brought that influence into what we do. We’re getting better at writing songs and trying to branch out more, but not get too far from what we do best. At this point, our fans expect a certain product from us. And after eight albums, I can’t say I blame them.”