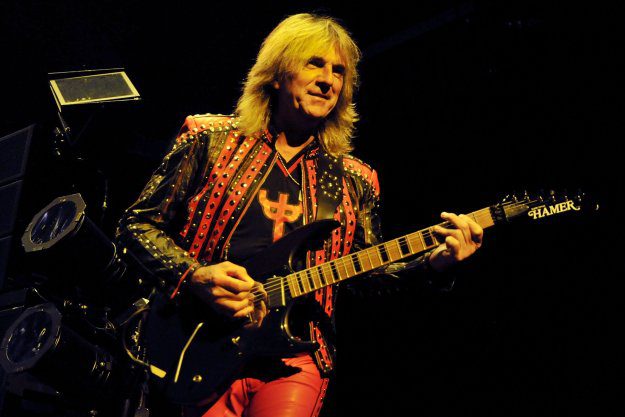 Rustyn Rose of Metalholic.com recently conducted an interview with JUDAS PRIEST guitarist Glenn Tipton. A couple of excerpts from the chat follow below.

Metalholic.com: You spent over 35 years playing side by side with the same guitar partner [Kenneth “K.K.” Downing]. What was it like for you to suddenly have a new face, a new style of player standing across from you in Richie Faulkner?

Tipton: It was a surprise, really. It came as a surprise to us all. At that time, I really, truly thought the band were finished. We were poised to do a farewell tour and, of course, Ken decided he’d had enough of that. I respect his decision. It must have been a big decision to make. I think we’ve all been through that phase. We’ve been around for 35, 40 years. But we found Richie, and Richie is a small miracle, because the guy is such a great guitar player and he blended in so well first on stage. And then, of course, he’s worked so hard and contributed so much to the [new JUDAS PRIEST] album [“Redeemer Of Souls”] that it’s just a miracle.

Metalholic.com: You guys declared the “Epitaph” tour to signal the retirement of JUDAS PRIEST and, as [you have] since said, “we lied.” Clearly the injection of new blood into the lineup re-energized the band. How did that translate into the writing for “Redeemer Of Souls”?

Tipton: Tremendously, you know, because when we got, obviously, new blood in the band, it was needed at the time. It would be the same thing; you get some new blood in there and there’s energy and enthusiasm — motivation. You see things in a different way. He just gave everybody a keep up the backside, really. And that’s what happened. We went from literally meaning it was our last tour to there’s such great songs on this album, it’s a shame we can’t get out and play them. So, by any means this isn’t another world tour. I’m glad we’re doing it. I feel that it would be great to get on stage and play these new numbers as well as the old classics.

Metalholic.com: When I reviewed “Redeemer Of Souls”, I stated it was the band’s most fully realized album since “Painkiller”, but more accurately, it seems to me it would have been a natural follow-up to that record. Tell us about the album from your perspective.

Tipton: I think it’s probably in line with “Painkiller”, as you say. It’s what everybody wants from JUDAS PRIEST. I mean, we’ve always been a band not afraid to expand and try new things, try new paths and directions. Like “Nostradamus”. There were many fans that got what we were trying to do with “Nostradamus”, but there were a number of fans that wanted a “JUDAS PRIEST” album, and in “Redeemer Of Souls” we give them a “JUDAS PRIEST” album. We listened, and we learned, and we’ve gone back, if you like, to what people want from PRIEST. I’m proud of “Nostradamus”. It was a monumental task to record and put together. But I think “Redeemer Of Souls” is what people expect from JUDAS PRIEST.

Read the entire interview at Metalholic.com.