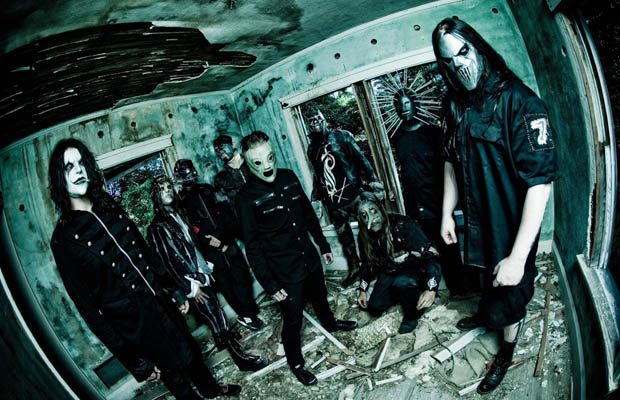 A brand new SLIPKNOT song called “Custer” can be streamed in the YouTube clip below. The track is taken from the band’s fifth album, “.5: The Gray Chapter”, which will arrive on October 21 via Roadrunner. The new CD is the first by SLIPKNOT since the 2010 death of bassist Paul Gray and the late 2013 firing of drummer Joey Jordison.

Speaking to the Q105.1 radio station in Fargo, North Dakota, SLIPKNOT singer Corey Taylor stated about the making of “.5: The Gray Chapter”: “The great thing about this band is we’ve never put shackles on ourselves creatively. If we’re feeling one way, we go that way. If we’re not, then we tend to go in the opposite direction. It’s one of the reasons why we took so long to actually start thinking about doing a new album, ’cause we weren’t gonna do it until we were ready.”

He continued: “As far as pressure, we’ve never had a lot of pressure, because we approach it that way. We’re, like, ‘We’re gonna do what we want. If nobody listens to it, that’s fine, but we’ve fulfilled something inside ourselves.’ So it was more emotional than it was stressful, to be honest. Because filling in the shoes of Paul, especially, was heavy duty. He was such an integral part of the songwriting process and had such a great ear for it, we knew that we were all going to have to step in and fill those shoes in, and I thought we did a great job. Jim [Root, guitar] came up with some killer stuff, I brought in some stuff, Clown [percussionist Shawn Crahan] really, he brought in some really killer atmospheric stuff that we were able to build into some great music. I think we all really stepped up to the challenge, and I think it was because we wanted to. It wasn’t because we felt we had to; we felt we wanted to, we wanted to be able to do that and really kind of make new music with this band again. So it wasn’t so much stressful as it was powerful.”

Taylor recently denied that the band’s new song, “The Negative One”, is about Jordison, telling Metal Hammer, “‘The Negative One’ is about me, and not just me, but everybody in the band. We all have so many different sides to ourselves, but especially with this band. When we get together, there’s something about the music we make that really unleashes the crazy, dark shit inside of us. And that song in particular is about, basically, embracing it again, giving into it and letting it have its say. Because if you don’t, then you sit on it and you repress and it blows up in really negative ways. So, that song is about freeing it.”

Taylor told The Pulse Of Radio that the new disc is autobiographical. “The whole album is essentially the story of the band over the last four years, and part of that story is that we’ve had to reach a point of acceptance with everything,” he said. “You know, the last four years have been really difficult for us.”

Taylor told Metal Hammer that the album is laid out like a story, “from the moment Paul died to the moment we stepped out of the studio. So there are certain songs that deal with, not Joey in particular, but about the tension and trying to deal with the ugliness that we all have in us.”

The identities of the band’s new bassist and drummer have not yet been revealed, but the bassist is widely believed to be Alessandro “Vman” Venturella, while the new drummer is thought to be Jay Weinberg, son of longtime Bruce Springsteen drummer Max Weinberg.