Stephen O’Malley (Sunn O))), KTL, Khanate, Burning Witch) along with AlukTodolo are coming to Greece for a special audiovisual show in Athens on January 31st at Fuzz Club.

Omega Monolith along with Holt will be the opening acts of the night which is going to turn to a massive ritual.

Read below the official press release by 3 Shades Of Black:

“Everyone stands alone at the heart of the world, pierced by a ray of sunlight, and suddenly it’s evening”

Stephen O’Malley is more than a great artist to us. He is the distant father to our deepest inspirations.  And to everyone, knowingly or unknowingly he is one of the most radical creators this age has seen. A creation that involves decomposition to create and thus that is complete in itself.

O’Malley comes at a time where arts to our understanding (and to the extent any definitive claim can be valid), experience their conclusion for this civilisation’s timeframe. His creations however explore not the end of this immense and properly interconnected timeline, but take us with a strange improvable but somehow definitive and absolute method to its very beginning.

These sounds break through the continuum, are born in a very ancient era and for the point that we are in tune with it, we become existent in both the further before and the further beyond. With the only single phenomenon of connection being, that near transparent and only partially (self) aware of this sacred moment of the manifestation of the absolute, this white line that interconnects them is us, the individuality standing profound. This is what O’Malley’s work tells us and it’s a realisation that manifests in every illusionary inch of our body. And it’s true beyond truth. And its value is immeasurable.

“Insofar they may expand on the O))) principles albeit perhaps a more sculptural and angular direction; the extended solid and geometric aspects of the guitar and amplifiers, sound pressure, volume and temporal structure as ambiguous and solitary form.”

Stephen O’Malley (b. 1974) was born in New Hampshire, USA and raised in Seattle. He eventually spent a decade in New York and presently is based in Paris.

As a composer and musician he has been involved in hundreds of concerts and performances around the world over since 1993.

Within Gisèle Vienne plays, he has created the music for Kindertotenlieder (2006), This is How You Will Disappear (2010) and LAST SPRING: A Prequel (2011) and The Pyre (2013) in collaboration with Peter Rehberg (with whom he founded the band KTL) and also for EternelleIdole (2009).

O’Malley has also worked together with film makers and visual artists in gallery installation work, notably with the American sculptor, Banks Violette on several pieces between 2005-2008.

Stephen O’Malley will perform UngroundExtended, that started as a gallery installation with his collaboration with GastBouschetκαιNadineHilbert and became a live show. More info and a sample of the project here. 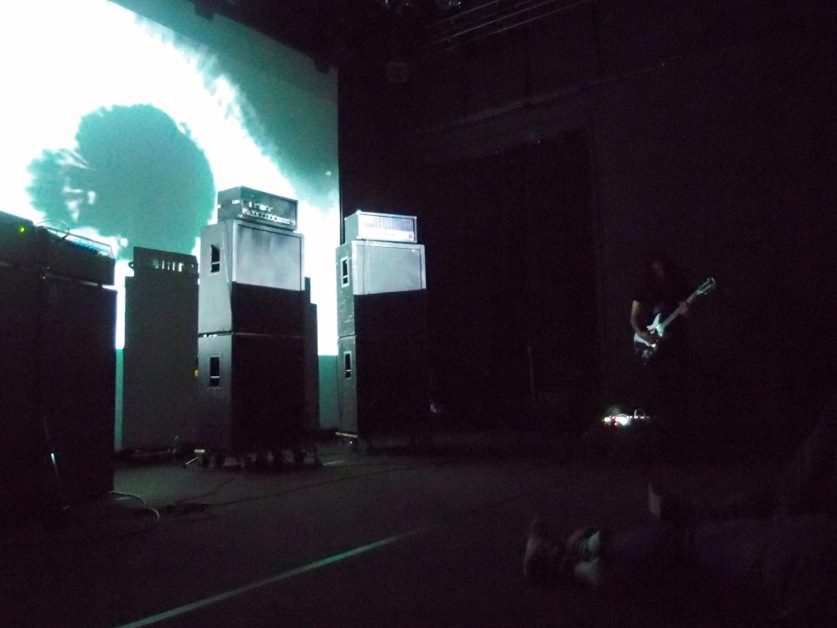 AlukTodolo, the way of the ancestors, delves through the subtler forms towards the great nothingness and returns with a psychedelic explosion. As dark as the most archaic emanations of the soul, while it stands reminiscing of its descent, they are telling the story of a wordless soundscape with delicate rays of light being names of ideas dissolving in an absolute darkness. And there comes the trance that takes you over. It’s a constant spiral ritual that binds you to it with no choice but to follow it. Nothing is redundant, everything is possible.

And since we can’t possibly assemble better words to explain what AlukTodolo is, here are the words of Antoine Hadjioannou:

‘This is our very goal to play Ritual music with Rock instruments. Homerecording. It sounds cavernous because it was recorded in a cave, where what lurks between the folds of audible can become real. For this reason the mixing process took a long time. Some HIDDEN things had to be unveiled.’

‘We conjure the Music. Sound is the begining and the end, the summoning and the manifestation. The presence of Satan depends of WHO is LISTENING. It is only a name, among many others, given to one of the Antediluvians, who are our ENERGIES.’

AlukTodolo are occult rock. And will play Occult Rock.

The name ALUK TODOLO was brought back from a mountainous region of South Sulawesi in Indonesia, it’s an

ancient religion with animist beliefs meaning «the Way of the Ancestors».

They have been invited by SUNN O))) to play the Roadburn Festival 2011 in the Tilburg – Netherlands and opened for them in June 2012.

ALUK TODOLO released 3 full length albums, a 7″ ep, a 10″ ep, a live tape, a 4 way split LP, and a collaborative album with der Blutharsch. Their latest double album «Occult Rock» has been released in september 2012 by the cult labels The Ajna Offensive (US) and Noevdia (FR) ; this opus summarizes and transcends all preceding aspects of the band’s discography and perfectly reveals the raging energy that leads them on stage.

Omega Monolith are more than brothers to us. They are brothers that we greatly admire and without them this ceremony of a show wouldn’t be possible.

This duo’s lack of numbers is the exact opposite to the amplitude in its creations. Takis slowly constructs an immense build-up of sound and resonance, guitar loop on top of loop, with Alex being a massive metronome holding the chaos together. Massive and drone yet very rhythmic, Omega combine some of the most eclectic aspects of what is contemporary psychedelic doom.

Black Campaign was the brilliant introduction to what is Omega Monolith. And the follow-up that will be unleashed on the 31st of January in their first live performingtheir new material is already sixsixsixsteps ahead and so good that leaves one breathless and exhausted, but with the great desire the partial deafness their show always provides for them to keep going till it becomes permanent.

Holt is the joint darkness of Labros from Slavebreed and John Kontan from CTS Productions/Afformance/Ghone/HEARTH.  And their statement is very much perfect: ‘Practice of the dark arts through noise and chants.’

Holt will open the live invoking those energies that will be our ground and sky recounting their chants and vitriolic mantras slowly building the formless foundations for the ritual that is to follow.