Christopher Johnsson, the man behind the awesome Swedish innovators THERION, uploaded on his private facebook page a recent photo with the following statement, concerning his health issues and the future of THERION shows with him on stage!!!

“POSSIBLY MY FINAL LIVE PERFORMANCE EVER ON 70.000 TONS METAL

Over 2 weeks ago I started to get HUGE pains in my arm, shoulder and back. It hurted worse if I lay down and got worse by each day. In the end I could not even sleep in bed anymore and had to sit up sleeping in the sofa every night.

Medicare in Sweden don’t work anymore. Equipment is great and the doctors are competent and do their best, but due to the massive population increase, the capacity and medical infrastructure has lacked behind each year and just seem to get worse and worse. After I got in contact with the emergency, it took me eight (8) days before I got to see a physiotherapist and he could not make a proper diagnosis without a MRI scan of the neck. It would have taken up to a month before I would get a MRI done and then it can take another month before I get the results.

At this point I slept l worse and less each night and when I tried to play guitar, I would only play half a song before the pain made me stop + my motorics got so bad that I was even physically unable to play most songs.

In order to not have to cancel 70.000 Tons of Metal and in order to faster get a diagnosis and get it cured, I (upon recommendation) decided to fly to Moscow and have it done there. They are at the same technical and competence level like in Sweden, but have capacity to treat patients immediately. So I got an appointment straight away, flew there and got a fantastic care with not only MRI, but also got to see a neurologist, physiotherapists and specialists. So I got a diagnosis the same day and it seems I have two spinal disc herniations in my neck, one really bad and one small that could get worse. In plain english this means that two of my discs in the neck are worn out (from headbanging and sitting too much in front of computer in the office and the studio) and have cracked so that fluid runs out from it. The fluid put pressure on the nerves in the spinal chord and create pain in shoulder/arm/back and distort mobility in the right arm.

In order to stabilise the neck, I have to wear a support collar for 2 weeks (even on stage) and they gave me cortisone injections to block parts of the pain temporary. So now I can at least (after 2 weeks of sleeping sitting in the sofa) sleep in my bed and with some pain and efforts I can play a festival set of simplest possible songs. So at least we don’t have to cancel.

After the cruise I will go back to Russia to meet a world class neuro surgeon who will determine wither it’s better to do surgery or to treat this without knives. The advantage with surgery is that if successful, I would recover much quicker. But surgery in the neck is always a risk and if worse come to worse, a failed surgery there could end up with me never being able to play on stage again.
To treat without surgery will be very painful and normally take 4-5 months before fully recovered (if unlucky longer), but this is what I am hoping for and the specialists that gave me the diagnosis were quite sure it would be treatable that way. But we will know for sure what the deal is after I’ve met the neuro surgeon afther the cruise.

So what does all this mean? It means that I will be playing at 70.000 TOM with great difficulties and using a support collar. It also means that the Rock Opera will get some month or two delayed, as I can’t sit in the studio at the computer (I will have to use a studio assistant) and not for as long sessions as usual.
It also means that if I end up having to do surgery, there is always a small risk that the cruise will end up being my final stage performance (which is a good reason for choosing the best surgeon Russia has to offer as soon as possible before the odds get worse – rather than taking my chances being assigned one randomly in Sweden and maybe have to wait many months before they have time to do it).” 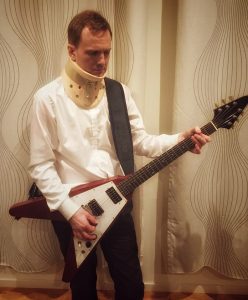 Metalpaths.com wishes quick recovery and the best of luck to the one and only Christopher Johnsson.