On Saturday, March 14th, Soulfly and Incite performed live in Thessaloniki. I was lucky – or unlucky – enough to win a free ticket a while ago and attend Saturday’s show. I had already watched Soulfly perform live three times in the past, so I hadn’t been planning on going until I won that ticket… Honestly, I’m not sure yet if my going to that concert was actually a smart thing to do… No doubt, this was the worst performance of Soulfly that I have ever seen! But let’s just take it all from the beginning…

First of all, there was no local supporting band at the concert, which I find totally meaningless, both for the people attending the show and for the metal scene in general. There are several worthy bands in Greece that could have performed before Incite, which would have both prepared the crowd for what would follow and at the same time it would have helped in promoting the Greek metal scene. 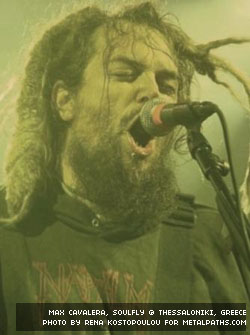 Speaking of Incite, I have to state that their performance was the only good thing that I have to remember from that show! Even though the sound wasn’t that good, they were very good and seriously, Richie’s vocals are among the few great that I have heard live during the past couple of years. At the same time, I should give my respect to their drummer, Zak, who played with a cracked crash cymbal and yet managed to amaze us!

Moving on to Soulfly, I am truly speechless! What I saw is far from bearable. Even though music-wise they probably did great, as usual, I am unable to tell you for sure if they actually did, since the sound was so horrible that at points I couldn’t tell which track they were performing! Only specific parts, usually rhythmic ones, sounded ok and the rest were truly chaotic. However, regardless of who is to blame for the sound, the result was hardly acceptable. Nevertheless, it shows great disrespect to the people who actually spend time and money to attend such a show! Correct me if I’m mistaken, but when making out with your boyfriend/girlfriend at such a concert starts to seem much more fun than actually paying attention to the band on stage, something is definitely very wrong about the whole event! Last but not least, I found it very annoying that Max Cavalera spent more time backstage than on stage during Soulfly’s performance and also left the stage before the band finished the last track of the show, without saying a word to the crowd! If that’s not disrespectful then what is?! Honestly, the only part of Soulfly’s performance that I found worthy was the part where they brought two extra drums on stage and had two people from the front row play along with them.

Music-wise, they performed several tracks from their latest album, as well as from the old Sepultura days of Max Cavalera. The people at the concert however, seemed to enjoy more the Sepultura tracks than the actual Soulfly tracks! What is surprising is that Soulfly used several intros from other bands’ tracks – I can recall Carcass – to introduce some of their own tracks, which was ok, given that the people realized where the Soulfly track began…

Anyway, this is my point of view and obviously there will be people who will refute my beliefs, but I’m here to say what I think and you are free to decide by yourselves. However, I had to say all these things, because I’ve never felt so humiliated in my life before… It was like our presence didn’t matter… Like they wanted to get it over with… And this is definitely NOT what music and concerts are all about!