After the conditions of The Haunted’s last visit to our country, I really thought that this was the last time we see the Swedish thrashers in one of our venues but luckily enough I proved to be wrong, so we had the chance to host them for once more in a couple of shows and us in the pleasant state to watch them at the 28th of March perform in Principal Club Theater.

Before I start writing about the bands’ appearance, worthy to mention is that the owners of the club didn’t pass along the “Earth Hour Global Movement” and turned off the lights for an hour, creating a beautiful atmosphere and the idea that in parallel with a show we would be a part of our future improvement. 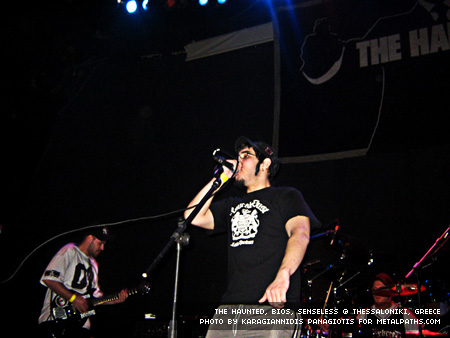 But let’s continue with the musical part which started at about 21:45 with Senseless from Thessaloniki as one of the supporting openers. The hardcore quartet, which is obviously influenced by the New York old-school sounds, enters the stage confident that their music is able to shut those mouths who want the hardcore scene out of the ring and ready to teach us to “Never Forgive” but mostly to “Never Forget” those guys.

Their aggressiveness and energy didn’t prevent them of achieving a strong connection to the crowd and their slow, down tempos among their fast thrashy tunes, was exactly what everyone was asking for in order to not regret their early turnout, as it often happens in every gig. Something that everyone was speaking about afterwards was that Senseless seem to totally respect the other bands that were sharing the stage with, hailing more than three times the names “Bios” and “The Haunted”.

What was their biggest highlight? Of course the “Take the Night Off” cover to Sick Of It All which left no doubt that whoever didn’t like them that night has nothing in common with the hardcore scene. A big clap to the rhythm couple Alex & John for their awesome stage set which made me keep my eyes on them in almost the whole show. 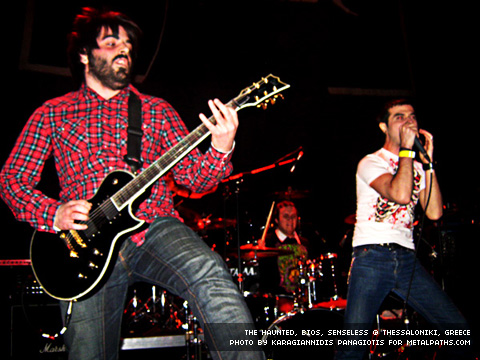 Next band were Bios from Kilkis, who constitute an example as to what a band can accomplish with hard work and dedication. The last time I saw them perform live was 8 months ago. In 8 months therefore they managed to improve to such a degree that left me speechless! Their performance was a terrific and ultimately suitable opening for “The Haunted”.

The first track they played was the well known by now “Impulse Come Out”, for which they recently also did a highly innovative video clip, and which definitely prepared the audience for what would follow.

We had the chance to watch one of Greece’s good bands on stage; powerful, percussion oriented and highly technical drums, concrete vocals and upfront lyrics along with catchy guitar riffs gave to the audience high quality music accompanied by a great performance on stage by Bios. It’s obvious now that these guys apart from talent possess valuable musicality, which I have to admit is rather rare these days in regard to Greek bands.

Their set-list was based on their first full-length album titled “You Label My Essence” but they also played a new song, as well as a tribute cover to Ramones. I am definitely looking forward to seeing more from them! 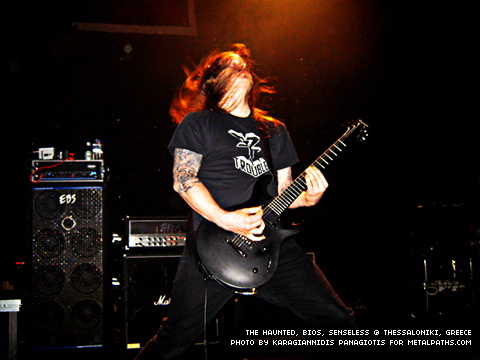 The time has come for the headliners to get on stage and for the fans to enjoy one of the biggest bands of the modern metal archives. Actually at the first couple of tracks I was not pretty enthusiastic as the sound needed to be a little fixed up and the band needed some time to feel comfortable on stage (whatever the hell that means for such a professional act), but this was only a few-minutes impression as The Haunted continued in a very strong way, playing their masterpieces and covering a big variety of all of their albums as we were used to them from previous shows.

Their stage set a total trade, especially the singer’s who didn’t stop for one single moment to jump and run in this unique way he only knows how to do so and once again I couldn’t stop admiring at the whole performance this guy’s voice which I think is able to reach every note he tries to. These things seemed more than enough for the crowd to get instantly mad and form a big moshing circle (and how could they act differently when songs like “Hollow Ground”, “Bullethole”, “Moronic Colossus”, “Invein” etc are being played)!

Seems that “The Haunted made the fans do it” once more, closing their set with “Hate Song” and leaving us in a total satisfied mood to continue our night and comment this blast! 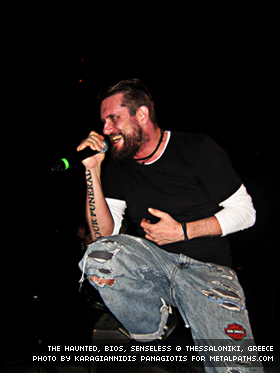 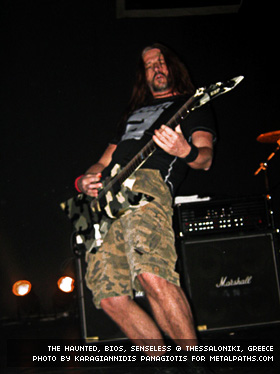 But like every story, this one as well does not have only it’s good parts as we were all disappointed by the number of the people who came that day to the venue and I feel like reminding once again that excuses like “transfer” and “ticket Prices” are way too cheap, as Principal Club tries the best to help the fans transfer from the center of Thessaloniki exactly in front of the club and the price of the ticket was not expensive at all, comparing with what we have already seen in some previous events. Nevertheless we still hope things will get better in order we build a better reputation and finally succeed to host more of our favorite bands in our area.