It’s Monday, 27 of July, and Metalpaths is traveling to Athens to attend a new festival that is called “Rocking Athens”. While there are not many festivals in Greece that feature bands from the extreme music spectrum, I think that every metalhead should support efforts like this festival, aiming to a better music-event-future. Festivals like “Rock Em All” and “March Metal Day” didn’t have the desirable reactions of the crowd and didn’t achieve to establish.

The establishment of new festivals will increase the competition between the “promoters” of the events and as a result we will have better band names for the festivals, in better prices and in better conditions. Hopefully, this time, there was more attendance of the fans to this new festival and we hope for a “Rocking Athens Festival” part two in 2010. 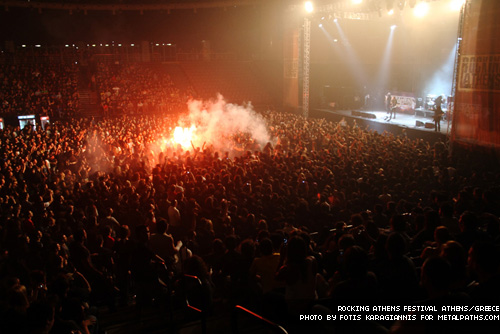 I think that around eight or nine thousand people were inside the Taek Won Do Stadium where the festival took place. The first opinions were great. It was really a good idea the fact that the festival took place in an indoor venue and not in open air. And that’s why we didn’t burned under the hot sun at 18:00 o’clock watching Gojira playing live, and we were in a really cool air-conditioned place, having the opportunity to watch the bands in a dark place with lots of light-effects.

So the conditions were great, and I think that a package of Heaven And Hell, Blind Guardian, Testament and Gojira is really attractive in the logical price of 60 euros.

First on stage, around 17:00, is the very promising Greek metalcore band Descending. Really powerful, with lots of catchy riffs and wonderful solo, featured songs from their brand new album “Enter Annihilation” leaved the crowd with good memories despite of the almost awful sound. 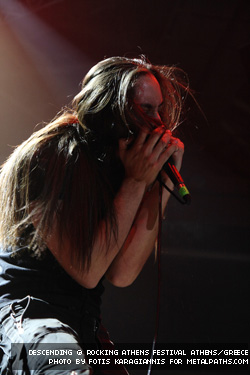 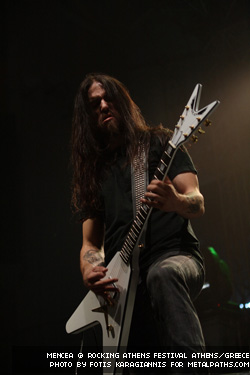 Now it’s time for the deathsters Mencea coming from Greece as well. The sound was continuing not that good enough, but Mencea did the best on stage and won the crowd’s attention. The strength that breathes out from their music, guided the fans to a merciless head banging. 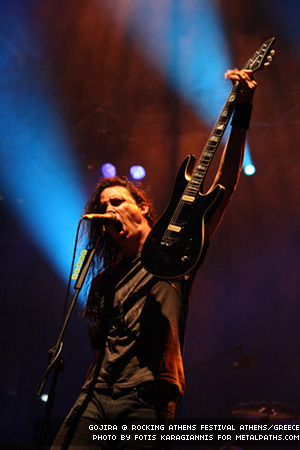 Next band is one of the “hottest” names in metal scene the last years: Gojira. The French quintet that almost conquered the metal-world with their latest release “The Way Of All Flesh”, are for a first time ever in front of the Greek crowd who was really thirsty to watch them live. What can I say?

Featuring songs basically coming from “Mars To Sirius” and “The Way Of All Flesh”, they filled the fans with something more than enthusiasm. Nobody could take his eyes away from the stage. The sound now is definitely much better. Gojira were just awesome banging their heads and jumping and moving around while musically they didn’t do any mistake. Songs like “Oroborus”, “Toxic Garbage Island”, “Vacuity” are of course some of the highlight songs that hit us to the bone.

What a great appearance! We are looking forward to watch them live again and of course we can’t wait for a new release.

Are you ready to “thrash”? Testament are on stage! I have to notice here that it was the first time that I saw Testament, and in the end of the show many people were telling me that “It wasn’t the best show that I have ever seen of them”.

I am still wondering how much better they could be? They were like real killers on stage and nobody could stop bang his head. Real panic! The mosh pits that have been created were like real battles! The set list included songs from the diamonds “The Gathering” and “Legacy” but from the latest release “Formation Of Damnation” as well. I don’t know if we could expect more!

The audience was on fire! In conclusion: Wall of death with the “Formation To Damnation” and the audience splits in two sides, and then crashed against each other creating a huge mosh pit! They really kicked our asses!

After all, it’s time for Blind Guardian. The relationship between the Greek crowd and the German power metal legends is something more than passion. You couldn’t see anything around than hundred Blind Guardian t-shirts.

The band started with the “Time Stands Still” and Hansi took all the eyes on him with his new haircut (we preferred the long-hairs mate!). However, they showed us one more that metal is not about hair and clothes when you play it correctly. “Nightfall”, “Imaginations From The Other Side” and “Valhalla” are some of the all time classic songs that Guardian don’t forget to play when they are in Greece. It’s really amazing the fact that the crowd know all the lyrics of the songs and sing louder than Hansi the refrains. 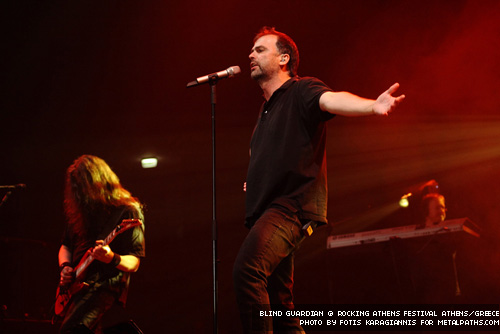 The band also performed a new track, called “Sacred”, that is going to be included in the upcoming release in 2010. The reactions were great while it seemed that the fans enjoyed the song. In conclusion, “Bard’s song” of course and the whole stadium was on foot with the hands up singing the lyrics. No, Blind Guardian didn’t leave us with a ballad.

The last song was “Mirror Mirror” and everyone was banging his head while a mosh pit had been created in the first line of the fans. Powerful as always

The time has come. Heaven and Hell (or Black Sabbath?) are for a second time in Greece. It’s exactly 22:22 while the four black-wearied men hit up the stage. 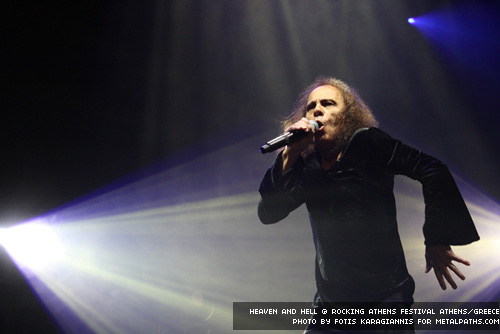 First song…and: “If you listen to fools: The Mob Rules!”, Dio sings and the whole stadium is on fire. If you close your eyes, and just listen to the music, you feel like listening to the studio version of the songs.

Dio’s vocal is the same, like 15-20 years ago: awesome. What can we say about Tonny Iommi? Just his figure on stage, cuts your breath. 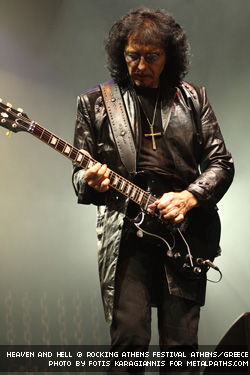 Geezer Buttler follows Iommi’s riff with his four-string bass, while on the back Vinny Appice keeps the tempo with his drum-kit. Yes, it’s Black Sabbath! The set-list includes songs from the recent release “The Devil You Know”, but the crowd overjoyed more the old-ones Sabbath. When the first tunes of “Die Young” sound, the hearts beats faster, the blood is colder, and the screams are louder!

What follows? “Heaven and Hell” and what happened must be hell! The most classic song of the “Sabbath-Dio-period” have been performed in a different way from the original version, in 20 minutes (!!!) cover with lots of experiments and great solos that moved as from hell to heaven. Last song was “Neon Nights”, the perfect choice for a finale. Sabbath are the leaders of heavy metal!

In the end, everyone was leaving the venue with a huge smile. Congratulation to On Stage for this effort. We’re looking forward for the second Rocking Athens Festival in 2010.