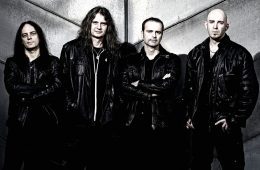 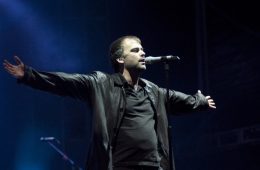 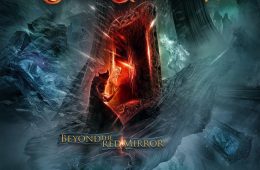 John SavvidisFebruary 16, 2015
One of the most important bands of German power metal alongside with HELLOWEEN and GAMMA RAY, BLIND GUARDIAN, are back 5 years after the amazing "At The Edge Of...
02 min read

Panagiotis KaragiannidisJanuary 30, 2015
Today is the day – metal fans can finally get their long expected copy of the new BLIND GUARDIAN album "Beyond The Red Mirror", which was also praised by medias...
01 min read 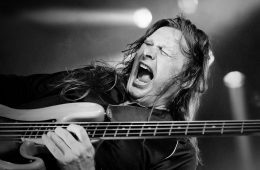 Panagiotis KaragiannidisJanuary 28, 2015
In the course of his career he had played over 4.000 shows and recorded over 60 albums. He worked together with musicians like Adrian Vandenberg (WHITESKNAKE), ...
02 min read 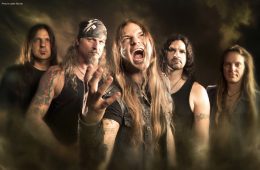 Manos SpanosFebruary 14, 2014
Hansi Kürsch of BLIND GUARDIAN joined ICED EARTH on stage on February 13 at Zeche in Bochum, Germany to perform the song "Among The Living Dead". Fan-filmed video footage of his appearance can be seen below. Asked how the opportunity came up to have Hansi lay down guest vocals on the studio version of "Among The Living Dead" during the recording sessions for ICED EARTH's latest album, "Plagues Of Babylon", ICED EARTH guitarist/mainman Jon Schaffer told Metal Exiles: "Well, the thing of it is, because we were in Germany [recording the new ICED EARTH CD], and literally like an hour and a half from Hansi's house, it was pretty easy. That's different than doing something like [the] DEMONS & WIZARDS [project with Hansi] where you have to get together, write songs. And I mean, Hansi came into the studio for one day. He got there around two in the afternoon, and he left at I think 10 or 11 that night. That's a whole different thing, coming in and singing parts that are already written, than getting together and writing songs... That's something that can take a couple months. Then you have to produce the record, and go out on tour and for both of us to do a DEMONS & WIZARDS cycle, we would both need a year of time to make that a reality, and that's just not a reality right now because ICED EARTH is too busy, BLIND GUARDIAN is too busy. So I talked to Hansi while we were in Germany doing pre-production for the tracking, and that was also pretty close to his house, and he came to visit us and I played the song 'Among The Living Dead' for him, and I told him, 'I would love for you to do a verse in this song.' He agreed, and said it would be cool, and, of course, he'd be up for that. And then a little bit later, I mentioned to him that normally when I'm working in Indiana or Florida, I have a group of backing vocalists that I can call upon to sing choir parts on the album, on the choruses. And being in Germany, I was a stranger in a strange land, so I called Hansi, and he said he'd be happy to help out, and that he had a friend he could bring along too. So, that's how that worked out." "Plagues Of Babylon" sold around 6,300 copies in the United States in its first week of release to land at position No. 49 on The Billboard 200 chart. The band's previous CD, "Dystopia", opened with around 6,100 units back in October 2011 to enter the chart at No. 67. ICED EARTH's 2008 effort, "The Crucible of Man (Something Wicked Part II)", registered a first-week tally of 6,700 to debut at No. 79. "Plagues Of Babylon" was recorded at Principal Studios (KREATOR, IN EXTREMO, GRAVE DIGGER) in Senden, Germany and was mixed at NHow Studios in Berlin, Germany. Guest vocals on "Highwayman" were laid down by VOLBEAT frontman Michael Poulsen and SYMPHONY X/ADRENALINE MOB singer Russell Allen. Guest vocals on "Plagues Of Babylon", "Among The Living Dead", "Democide", "Resistance" and "If I Could See You" are by Hansi Kürsch. The cover and additional artwork was created by Eliran Kantor (TESTAMENT, ATHEIST, HATEBREED). ICED EARTH will promote the new CD in its North American homeland with the headlining "Worldwide Plagues Tour", which kicks off April 4 for a six-week run with SABATON and REVAMP in support.
03 min read 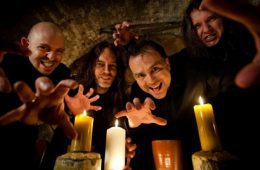 Manos SpanosOctober 18, 2013
Vocalist Hansi Kürsch of German power metallers BLIND GUARDIAN has issued the following update: "Surprise, surprise, "I am sure no one expected me to be back with news about a band called BLIND GUARDIANso quickly. The reason is quite simple: I'm a workaholic and I have no idea what to do with all my remaining energy at the moment. Therefore I have decided to spend some time with thoughts about BLIND GUARDIAN's future plans. "Here is my remarkable output… "Like the majority of you, I was also very surprised when our show in Geiselwind was announced for May 2014. I suppose that I, or one of the other guys, have agreed to this show. I'll probably never figure out who did it, but that's not important now, the show itself is of importance. "To be honest, all of us cannot wait to get back on stage. Our stage abstinence seems much longer to us than 'just' 2 years. "Since we were asked to do a 'best-of' show we do not even have to rehearse, this is more or less the type of show we have done in the past anyway. I still hope we can put in some surprises since no one really knows what we consider our 'best-of' songs at the moment. It might differ from 'Memories Of A Time To Come' though. Right now I'm working on a possible set list and I'll cross my fingers that this will be approved when the others have a look at it. "By announcing this live appearance, we also secretly announced the intended termination of our album production for the end of May. We obviously have progressed quickly, in BLIND GUARDIAN terms, that is. Indeed, everything looks very promising with regards to our songwriting and our production. We have good reasons to believe that the album is going to be completely finished at that point. Let's hope I will not be proven to be the reincarnation of good old Münchhausen again. Anyway, even the worst-case scenario would have us not being too far away from completion at that point. "Since we have already completed several production steps on the new album, the picture gets clearer and clearer. Although not necessarily clear enough to decide whether I'll go lyrically for individual topics on each separate song or instead for a conceptual album. On one hand, the concept would have a strong fantasy link and on the other hand it would contain some typical Dystopian elements, because this is also what I musically find in most of the songs. They will all feature an almost magical grandeur but will present some very harsh disturbing elements as well. Therefore such a concept might be very suitable. I will have to sleep on it for a while until I'm able to make a decision. "Whenever we start songwriting, I try to create a plan in my mind detailing which qualities I would love to feature on the next BLIND GUARDIAN album and what general impression I would like to create. Very often at the end, things come out quite different and I'm surprised which qualities or preferences have shown up then. This time there seems to be a collective urge (without even having talked about it) among all
06 min read 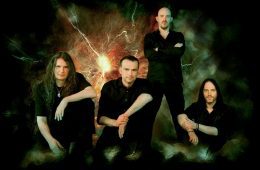 Manos SpanosJanuary 20, 2013
An eight-minute preview of "A Traveler's Guide To Space And Time", a strictly limited-edition BLIND GUARDIAN box set with 15 CDs in 13 high-quality digipacks an...
07 min read