It was one night that many of us awaited for months. Four groups together, in a cool price (that’s where we have come, considering 33 euros a normal price for a live concert in Greece) and with all the aspects around the gig, preparing us for something memorable. And it was no less than that, for we enjoyed for nearly four hours a hellish live experience. Seldomly we have the chance to see massive packages that tour extensively in Europe coming to Greece. This time, we were really lucky to see a mixture of totally different bands delivering the goods for about 400 metalheads that reached Principal Club that Saturday evening.

Evocation from Sweden was the band that started the show. They didn’t play more than 20 minutes unfortunately, that’s the bad thing with the opening band most of the times. Like most Swedish death metal bands, they bow down to Entombed, but they also have elements from the Goteborg side, some At The Gates parts for example. They are an experienced band, as they formed in 1991, but their first release ”Tales From The Tomb” wasn’t released until 2007. Last year they released ”Dead Calm Chaos” and they had the luck to come on the road with three other great bands. They made their part precisely and they gained the applause of the crowd, they just didn’t have time to show more potential. Maybe one day in the future…

Obscura from Germany was to be honest, the main reason i attended this show, as i have witnessed Cannibal Corpse four more times and Dying Fetus twice more. They are one of the hotest new acts in the metal scene and they came here to prove it. Piece of cake of course for such talented musicians, without showing affected by the fact that their bass player couldn’t make it due to work issues, so they recruited the bass player from the brutal deathsters Defeated Sanity, who made an excellent job, driving the rhythm section to phenomenal moments.

The two guitarists seemed to draw bizarre paintings with their complex riffs, creating a massive vast surface of riffs, followed by progy leads that bring back good memories of past bands. Unfortunately they only played for half an hour, and they presented songs just from their latest release ”Cosmogenesis” (buy this album if you consider yourself a man with heart inside his body, you will feel it beet faster and healthier for sure). They started and finished the show as with the record. The first track was ”The Anticosmic Overload” and finished with ”Centric Flow”. Only six songs and without the cover of Death’s ”Lack Of Comprehension”, but still they made many jaws drop on the ground. I am very happy that the band members recognised in Greek fans the fact that they really support them and they promised to come back soon. I am coming for you guys in Hellfest on summer. Can’t help counting the days.

It was time that the New York trio of Dying Fetus appeared on the stage and Principal Club started get blown by atomic bombs such as the initial ”Homicidal Retribution”, straightly followed by ”Your Treachery Will Die With You”. The moshpit has already started from the first notes, and without any mercy in their souls, the legendary riff of ”Grotesque Impalement” tears the air and the fans apart. It is so amazing that they play these songs so challengingly easy. John Gallagher is giving the sign for the catastrophe that follows just by turning his finger round and round, the sign of moshpit beginning. Since it is the diehards’ time, they play ”Intentional Manslaughter” (holy shit), and without any warning the first notes of ”Justifiable Homicide” cause frenzy, since ”Destroy The Opposition” is the most favourite DF album to fans.

What follows is a gigantic beginning of ”One Shot, One Kill”. The best moment maybe of the whole night, with the main riff being produced 100 times more obsessive. I am blown off in all ways but they don’t rest. ”Sheperd’s Commandment” from the new album ”Descending Into Depravity” prepares the ground for ”Pissing In The Mainstream”. A typical song on each show of the power trio. But it is not until the characteristic drum break of ”Kill Your Mother/Rape Your Dog” causes mass hysteria, because we all know that ”Praise The Lord (Opium Of The Masses) will follow to throw our carcasses away. This dynamic duo was the set closer, were we are all left dead for good, unbearably tired and just looking at each other with a big smile on our face, unable even to mumble a word. Gentlemen, you rule big time. I can see you everyday for a lifetime. Come visit us again soon. 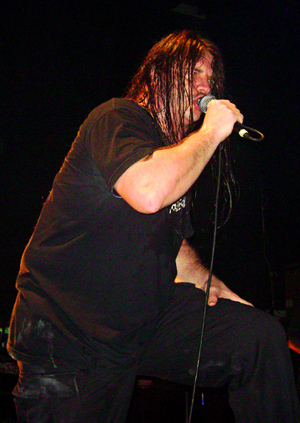 The time is 10 a.m and the legendary Cannibals of death metal enter the stage with the title track of their latest release, ”Evisceration Plague”. This time I wanted to listen to some groovy stuff and the mostly death metal ones, and it was done. ”Time To Kill Is Now” follows the mid tempo tune, while my first surprise comes with the overloved ”Disfigured” from 1996 ”Vile” album. I already felt full and wanted nothing else. ”Death Walking Terror” sounds twice as good in a live concert, steady and pounding. George Fisher says ”This next one is about shooting blood on your cock. I want you to bang your heads, you may want to test your skills against me but you’re gonna lose. At least you’ll know you have tried”. This little prologue came for ”I Cum Blood”, one of the fastest Corpse songs ever.

Then came the classic dedication to the women, entering ”Fucked With A Knife” to create World War 3 in the 2 minutes it lasts. It is time to ease a while (well, in the most possible way in a Cannibal show) with ”Sentenced To Burn”, before ”Evidence In The Furnace” from the new album forces the fans to a large moshpit once again. The title track from ”The Wretched Spawn” was one of the tunes i really needed to listen again, one of the best tracks of the band in this decade for sure. ”Scalding Hail” from the new album blows us off again, and ”Make Them Suffer” speeds our necks more and more. The track i was dying to listen again was ”Pit Of Zombies”. It is one of the most complex CC songs in history, you just can’t help craving for it,then comes the second surprise. ”Vomit The Soul” from ”Butchered At Birth” was unawaited, but still welcome 100%. ”Priests Of Sodom” was the last song we heard from the new album, followed by ”Unleashing The Bloodthirsty”. The necks are on fire, our cheering gets higher, ”Hammer Smashed Face” smashes us completely and ”Stripped, Raped And Strangled” ends the night in total obliteration of the place, the fans, the speakers. Everything was perfect. The sound could be better on Obscura’ s set and in the beginning of the Cannibal Corpse show.

In conclusion, it was a devastating night for us all, we wish we will have such moments in the future. We must give praise to the promoter that booked this package, the tour manager who helped us with the interviews, the fans who left their Saturday exit just to see the show and the bands for making our money worth spending. Time to relax these days, as live concerts continue and energy is needed. Until next time, we will remember you guys with the best memories.