Travelling by train from Thessaloniki to Athens for the Fates Warning show in the same wagon with  Ray Alder and Frank Aresti was a unique experience. Not because they are big stars or anything but because of the exact opposite. Two modest men, watching the “Inglorious Basterds” Tarantino movie and then talking about Metallica (see some things never change). Sad to reveal to you that there was no talking about new ideas, songs, albums etc. Also glad to see that Ray’s hair was in the length of old (just for the “Parallels” show!).

Fuzz club was really crowded that night. People seem not to forget the progressive metal colossus even after all these years of absence. The five piece band appeared on stage and a smile was painted in everybody’s face especially after seeing Mark Zonder behind the drum kit. He was really missed the previous time. The first notes from “Leave the past behind” confirms what everybody knows. We are going to hear the complete “Parallels” album. Little can be said about the songs. They have been tested by time and came out winners. The band was a bit nervous but it’s totally understood. You can’t just mess around with such material. Ray was the only one who seem confident but that’s probably because of the tours he made with Redemption. 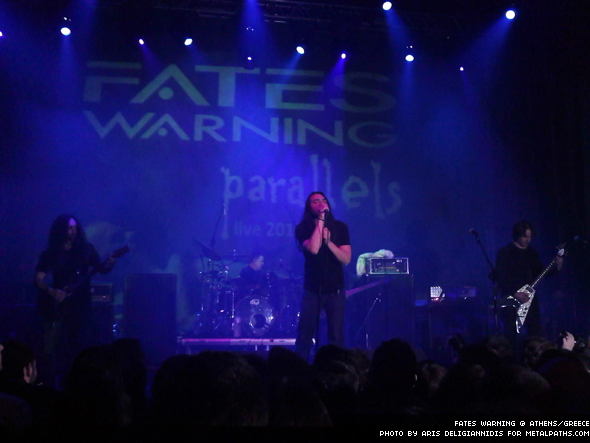 Although we should not omit to point out that he never went to the vocal heights of the past. We all age, right? As was expected “Point of View” was the highlight of the “Parallels” session. Heavy guitars, eternal melodies and people singing trying to compete the db’s of Ray’s microphone. “The Road Goes on Forever” and it’s beautiful melody sends farewell from an album that accompanied us at many times of our lives. It can be really 20 years, can it?

After a short break the band is back with us for the second part of the show. “Monument” is the “Point of View” of this part. Everyone knowing that this is not a live but a party of a band from the past, screamed the lyrics of this real monument! “Pale Fire”. “Face the Fear”, Through Different Eyes”, “Nothing Left to Say” was some of the songs that proved that the band would concentrate on the far past than on the more recent one. “A Pleasant Shade of Gray” and “Disconnected” were complete left out. “Another Perfect Day” represented “FWX” album and proved to be rather weak for a closure.

The overall sound was more than just good. Everything was heard perfectly. just some levels should be adjusted (the vocals should be higher for example). The band showed that bicycle and organ playing (hey, don’t smile) are the two things you can’t forget. Jim Matheos,  the silent leader, didn’t miss a note. Probably, he holds his six string in hands while watching the stoke market go up and down (yes Jim, we know what you do for living). Joe Dibiase getting b-older was the only one along Ray who was moving on stage. Frank Aresti and Jim Matheos standing still at their spots, were the two  pylons of  this great progressive sound structure.

Not believing that we’ll ever hear a new album from this band and maybe see them again live, this was a very unique moment. An “APSOG Tour 201?”  sounds fine don’t you agree?