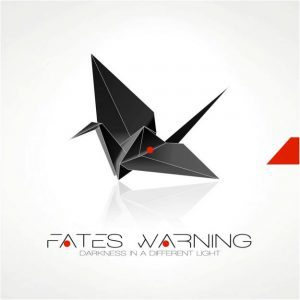 I’ll start this review by saying that my relation with Fates Warning has always been special and controversial, as I was never a fan of the albums that have made a lot of people love them deeply, such as ‘’Perfect Symmetry’’, ‘’Parallels’’ and ‘’Inside Out’’. The absence of riffing and too much pointless moments in these albums (for me personally, don’t start cursing) have made me come to harsh argues about them. That doesn’t mean I don’t respect them as a band, feeling a deep addiction to their first four albums (especially ‘’Awaken The Guardian’’ and the milestone of their discography so far, the invincible ‘’No Exit’’) and their post 1997 albums, which I find rather interesting, innovative and in the right direction, at least for the progressive music I like to listen. More guitars were added album by album and here we are, reaching the eleventh album of the band after nine years.

Since 2004 and their latest release ‘’FWX’’, many were the fans worrying if the band would continue, as there was a feeling about a possible split-up. The fact that Jim Matheos was more focused on the O.S.I. project (with great results), and his album with John Arch last year (a true masterpiece), plus Ray Alder’s contribution to the amazing Redemption, made the FW die-hards crave for a new album. I had a feeling that this new album would be great, especially when Mark Zonder left the band and Bobby Jarzombek came to his place (sorry folks, but I consider him a much better and essential drummer than the legendary Warlord gentleman). The return of my most beloved FW member ever (together with John Arch), Frank Aresti on guitars, made me certain that this album would kick serious ass, as it really does in the end,making it my favorite FW release since 1988.

‘’One Thousand Fires’’ makes clear from the very beginning that we have a very fresh, heavy and rather simplified in structure album which succeeds in getting the listener’s attention from the first second and for the next fifty six minutes that follow, you’re in front of some of the greatest tracks the band has ever written. ‘’Firefly’’ is surely the song that will get the biggest attention, showing the band’s ability to write catchy, but also very special material. The extended version of it contained on the limited edition is way better, adding 140 seconds and I really don’t know why it wasn’t included in this form on the album. ‘’I Am’’ will remind you of Tool (which I find not bad at all) and is one of the best tracks on the album, while ‘’Desire’’ is the shortest one and serves great in the flowing of the album.

My only complaint on the first half of the album is the short duration of ‘’Falling’’, lasting only 95 seconds, which could evolve to a track that would bring the chills to everyone. The duo of the haunting ‘’Lighthouse’’ (a simply structured track able enough to bring countless pictures in front of your eyes) and ‘’Into The Black’’, brings us before the hidden diamond of ‘’Kneel And Obey’’ which contains a great riffing outburst in the middle. ‘’O Chloroform’’ contains lyrics by Kevin Moore and it’s the final touch of the album with ‘’And Yet It Moves’’, a fourteen minute epic, which keeps the best for the end of the album. If not the best track of the album, then surely the most ambitious, it’s worth every second and puts a great finishing feeling which makes me think that the band can go on in this direction and make an even better album in the future.

‘’Darkness In A Different Light’’ took nine years to get complete and if they are to make another album like that once again, then I don’t care if it takes them nine more years, as long as it sounds so fresh, heavy and with a great performance from each member (especially Ray Alder sounds better and more mature than you can imagine). Jim Matheos once said that he didn’t have to play solos or put more guitars to add needless notes on his music. This album (and what he’s done the last decade) proves him wrong and shows the way that the band must go on. It’s not bad for them to remember playing heavier, remembering being a metal band and above all, causing fans to bang their heads on their songs. Fates have released the album I’ve been expecting from Dream Theater this year and one of the best of this year. With this specific line up and this specific heavier approach, the next album is already awaited. This one is already a classic for me. Dig it!