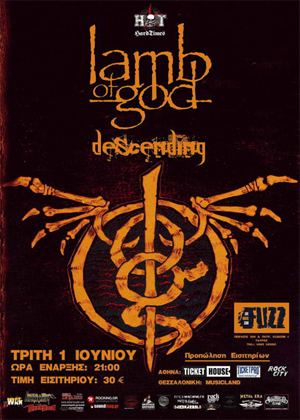 Luck is sometimes by the side of the ones going after it. You have to be able to know when to be patient, and maybe fate will bring something you’d be craving for on your way, sooner or later. Greeks were waiting the last five-six years to see the best band of our times, Lamb Of God. Knowing that our country is sometimes many steps back behind what’s happening in the rest of the world, this continued seeming like a lie. Thankfully, there are some guys whose minds take turns, and with the fact the band is on the top of creativity, they decided to take the risk, and this did justice to them, as the show was sold out and the fans still astonished after what they have seen.

Descending were the lucky ones to open the show for the pioneers of American metal. They were tied and they had a pretty good sound for a support group, but in terms of songwriting, I barely saw something personal in their sound. They had a good presence objectively, but they seemed a little more nervous than required in such occasions. I truly understand this, as they had a very big responsibility towards 1.500 fans that filled Fuzz Club. They played about 40 minutes and left the stage applauded by all fans. Personally not my cup of tea, but once they work harder and put more personal and heavy incidents on their sound, they can look forward for something better.

The best band in the world, Lamb Of God, started the show with the intro of ”The Passing”, shortly to be followed by ”In Your Words”, and the American Dream was revealed in front of our eyes. The sound in the beginning is not what we call ideal, but soon it fixes so, as we are able to enjoy the catapult called ”Set To Fail”. The suffocating atmosphere inside the club doesn’t allow us to do many things, as we are stuck to the guy next to us, unable even to headbang ourselves. Fortunately, this changed when they played ”Walk With Me In Hell”, where some action started going on, with people crowdsurfing or even making some moshpits in the centre of the club.

Next one was ”Ruin”, dedicated by Randy Blythe to the old school fans. As far as the band is concerned, Chris Adler had all the lights upon him, being one of the three best drummers in the world today. Certain, direct and professional, he provided the feedback for bassist John Campbell to follow his crazy rhythms, with the two guitarists drawing pictures full of molten riffs crushing our heads. Willie Adler a little more lazy and Mark Morton looking like he’s having very much fun. But Randy is something else. His long hair fit him that much, while he moves up and down and bangs his head each time he ain’t singing, looking astonished at the crowd bowing down to Lamb Of God.

”Hourglass” was one of the tracks that we really wanted to listen to, while the new ”Dead Seeds” proves why ”Wrath” is the most mature album of the Virginians. Next were two tracks from the beloved ”Sacrament” album, talking about ”Blacken The Cursed Sun” (big time surprise) and ”Descending” (big big time suprise also). Many people would prefer ”Again We Rise” or ”Pathetic” instead of the two above, but I saw none complaining. Next was what Randy called the punk song of the night, ”Contractor”. I could barely enjoy this, as everything around me fell apart and the only thing I could do was watching people get crazy or becoming violent in the good friendly way.

Maybe the most recognizable song of the band is ”Laid To Rest”, judging the fact that ”Ashes Of The Wake” made a lot of people get into the group, so you can all imagine what happened. Not only they didn’t seem to sit on this, but in complete haste, Randy announces ”Omerta” with the great spoken intro and the colossal riff makes the whole place groove up, down, left and right. The supposed to be encore didn’t take place in the way we know, as the band returned very quick to finish what had started about an hour ago with ”Vigil”. Our father thy will be done… What was left for all of us to see? Everything seemed complete.

Well, in terms of Greek behaviour, we always tend to ask for more and be unsatisfied. So it was ”Redneck” that made the band realize where they had come, as ALL people sang and banged their heads towards the rhythm. The familiar wall of death created by fans before Randy asked for it prepared perfectly the ground for ”Black Label”, in a tremendous live occasion which seldomly we have the chance to witness. The band promised they will definitely come back, the fans were exhausted by the heat, but happy from what they had seen and despite the drawbacks of the sound and the lack of air, we all witnessed the greatest band on earth at their greatest momentum. Meeting Randy by luck after the show, first thing he told me was ”Thank you guys for today, one of the greatest shows ever, indeed”. So, who am I to say anything more than this? The voice spoke and said it all.