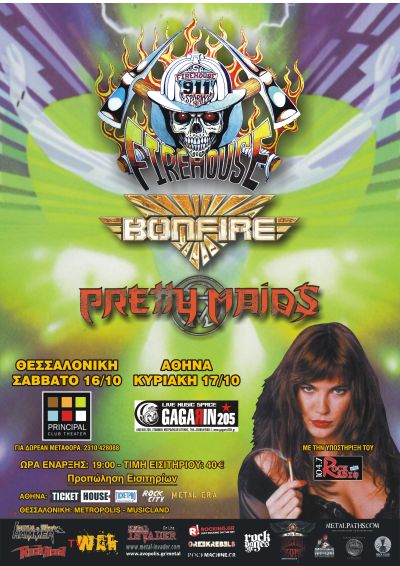 Well well after many months on hold, heart surgeries and volcano eruptions this gig was seen as “cursed” from many people in Greece. However, it was to bound to be done with the best possible line up with Firehouse along with Bonfire and Pretty Maids who replaced TNT who had also replaced Hardcore Superstar. The doors opened at 19:00 and I was surprised to see in a gig that took place in Greece, that everything went according to schedule.

However, I was somewhat disappointed to see the oldest of three bands, Bonfire, hitting the stage first with the venue not packed at first and I missed the first one or two songs, when, as I heard, Clauss Lessman brought up all the photographers who were under the stage in order to take photos of the crowd. A nutcase in the good sense.

The German melodic hard rockers, went on by giving us the experience of hearing some of their greatest hits, not only in their long and successful career, but of their whole music genre such as “Under Blue Skies”, “Sword and Stone”, “American Nights” and “Sweet Obsession”. Also, midway during their set, Bonfire paid their dues for Stevie Lee, lead singer of Gotthard, singing “I Am On my Way”, a song that he wrote, sending shivers and tears all over the venue. They closed their set with their hit ballad “You Make Me Feel” giving us everything they’ve got on stage.

Bells Of Freedom
We Still Rock
Never Mind
Hot To Rock
Don’t Touch The Light
Under Blue Skies
I Am On My Way (Gotthard cover)
Proud Of My Country
Swords And Stone
Drum solo
American Nights
Guitar solo
Sweet Obsession
Ready For Reaction
Encore: You Make Me Feel

Not long afterwards, the Danish legends, Pretty Maids, touring on their new record “Pandemonium” hit the stage sending a rush of excitement across the audience. After a small intro, they began their set with “Pandemonium” with the 800 – 900 people going nuts, especially in the front rows.

However, despite the excitement, some serious technical problems occurred as during the half of their set, singer Ronnie Atkins was bearly heard and afterwards Ken Hammer faced some serious problems with his guitar equipment nevermind the useless drum solo that intervened as the roadies were struggling to fix things.

Despite all these, Pretty Maids went back as if nothing had happened and with many of their problems solved the heaviest group of the night gave us some of the most important songs of the 80’s in a set that was mainly based on their new record. A good performance overall that could and should have been better, given the circumstances.

Soon after 23:10 Firehouse hit the stage with their classic intro “Rock On The Radio” playing on the speakers. They went on singin’ Love Is A Dangerous thing and all went surely better than the Pretty Maids’ gig, with the band surely wanting to have a great party along with the crowd of 900 that sang almost every word of their hits.

Byeeee bye baby bye byeeeeeeeee and everybody gets crazy with CJ and Bill Leverty in great form. Except for the heaviest songs, “When I Look Into Your Eyes” and “Love Of A Lifetime” create a romantic atmosphere for the couples that attended the gig. However, we were…helpless to…shake and tumble down and Firehouse nearly after 24:00 proved that this concer, on the whole was an… overnight sensation!

Firehouse skipped the encore bullshit (to the relief of the audience after standing nearly 4 hours) and in “Reach For The Sky” CJ didn’t even have to sing as we all knew every word of the song.

Three great bands, a bunch of great songs from another time when music was a lot different and on the whole a great night and party, not a concert. Thumbs up!