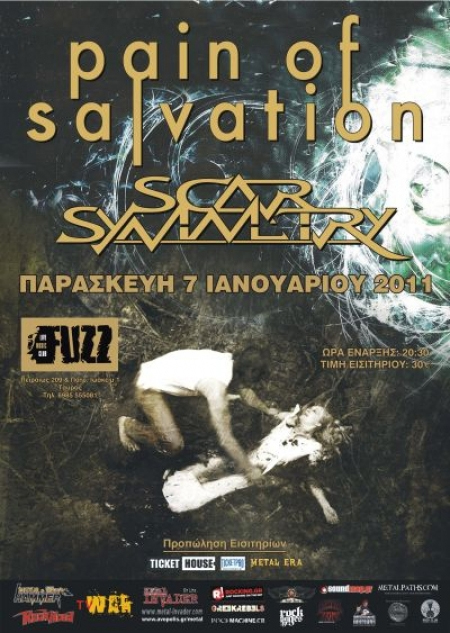 It was about 8.20 when I arrived outside Fuzz Club, without noticing any signifact amount of fans outside the venue. So,I took the decision to go inside and see what was happening. The club was courageously filled with well dressed beautiful women accompanied by their partners.

Besides that, Scar Symmetry had already started their set. They are a melodic death metal band which was formed in 2004. Despite their only 6 year presence they have gained popularity for their catchy technical guitar riffs and also undeniable talent of their former vocalist Christian Älvestam, who was replaced with two new vocalists, so I was very curious to see how the new line-up of the band will attribute tonight.

I think that one word can describe the whole situation very frankly and that is DISSAPOINTMENT. In my opinion, Roberth “Robban” Karlsson who is the man doing the harsh vocals in the band was ok getting really good along with the band , but Lars Palmqvis (the man who does the clean vocal thing) was unacceptable. Not only he was worse than the two guitarists of the band who were attempting some back- clean/harsh vocals in some songs, but also failed trying to do some screams during some parts of the death metal vocals, where Robban was trying to do his best. To make matters worse, we was continuously making silly things on stage destroying every attempt to enjoy the set. As for the instrumental staff, after the gradual improvement of the sound, I was completely satisfied seeing that they were really good musicians, who have new, fresh and innovative technical metal ideas. Nevertheless,the band seemed to enjoy playing for the first time in Greece, proving it with their constant smile leaving the stage 45 later with a mediocre set list keeping in mind their 4 album full length discography.

After waiting for at least 40 minutes , Pain Of Salvation came into stage for the seventh time in Athens (I think) including 2 acoustic shows to give us one of the most magical live experiences ever, starting 2011 with the best possible way! Their set started under the melancholic tunes of ”Ending Theme” and what followed next, cannot be described with mortal words. The whole live presence of the band was totally awesome, showing us that they are here to stay, playing every single note of their songs with such energy, passion and emotion making them 20 times better than the studio recordings. Early enough, I was really surprised to hear that they are going to play some stuff from the Entropia album as it is my favorite P.O.S album.

Hearing live ”People Passing By” and ”Winning A War”, ressurected frozen memories of a glorious epoch for the most of us, escpecially for the older fans of the band. The mood climaxed during ”Linoleum” one of the most energetic songs ever written, everyone was jumping and singing loud with all their heart during the refrain. Moreover, the implemetion of the song ”Kingdom Of Loss”, was unique as it blames the modern way of life, while ”Ashes” gave its romantic feeling and tone to this brilliant night, making couples hugging and kissing each other. The band also played ”No Way” and ”Road Salt” from their brand new record, giving the night a 70’s feeling showing that they have really got into their new work.

No one can deny the fact that the best moment of this marvelous show was the song ”The Perfect Element” including the magnificent guitar intro (”Falling” ) done by Daniel. Our souls travelled to unknown spaces to hell and back again and finally we were brought to the so called catharsis accompanied by a great drum trick at the end of the song. The sound was excellent with no problems at all, letting Daniel’s great voice distinguish. Also, I would like to add that Daniel Gildenlöw is one of the greatest frontmen I had the honor to listen live. He seemed to be familiar with the Greek crowd keeping the mood cheerful with his great sense of humor.

Furthermore,I was glad to realize that Daniel is not only a great vocalist and guitar player, who was constantly headbaning and jumping around with almost every chanche, but also really good at drums covering Beatle’s ”Come Together”, Stevie Wonder’s ”Superstition”, featuring the band’s guatirst Johan Hallgren in vocals & Dio’s ”Don’t Talk To Strangers” featuring the band drummer Léo Margarit in vocals, who both were equally really talented. The Dio Tribute did not stop here, a jazzy version of Holy Diver was to follow making everyone smiling and singing along. Two hours after their normal set and their 4 wonderful covers Pain Of Salvation left the stage playing the song ”Nightmist”. All in all, Pain Of Salvation still provides us with quality music and live performances since 1996, respecting their fans as much as they can and giving their best at every live and proving their pure and talented musicianship over and over again.